Pop quiz: What is the significance of the number 51 in my life?

A. Moving violations on my driving record.
B. Times I casually reference my one-gig stint in a Neil Diamond cover band (annual).
C. Roommates I have had outside my immediate family.
D. The number of girls I have kissed (annual).

To date, the correct answer is C, though if my recent pace holds up, the answer will be A in about five years.  B could be correct if I actually worked the numbers, and I will remain silent on option D.

It's a little sobering to think about; I've had more than fifty roommates in my adult life.

Well, sort of my adult life.  I'm counting the dozen or so who I either served with or shared apartments with during my mission in Chicago, and while they certainly count as roommate experiences, I'm not sure I would really call my state of mind "adult" for that period of  time, and I have plenty of pictures to prove it.

Still, regardless of the category, you have to admit that 51 is a pretty substantial number.  You could read it a lot of ways.  You could say it's a good thing, because I've never gotten into a fist fight with any of them (though I did get close for a stretch in Freeport, Illinois).  Or you could say it's a bad thing, since I've never lived with the same roommate for more than a year and a half.  I don't know; is that a bad thing? 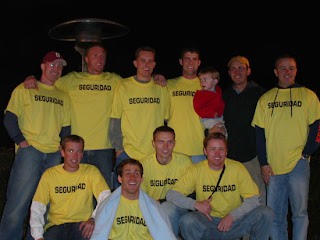 Crunch the numbers a little further, and you find that my personal record for simultaneous roommates is eight, during my third semester of grad school at Utah State (pictured, and yes, that's Peter Breinholt...it's kind of a long story).  And of my eight non-mission residences, four of them had me sleeping in basement bedrooms (five if you count the time I spent watching old "X-Files" episodes in the unfinished basement of my Woods Cross place).

Add it up, and I guess that makes me some kind of social troll.  I'm not sure what that does to my marryability index, but then again, "marryability" seems to be in the eye of the beholder.

So are moving violations, apparently.
Posted by The Professor at 8:13 AM