One Last "Crikey" for Steve

I'm really not sure how to feel about it. Obviously it's a tragedy, and he really did seem like a good guy, but at the same time, the man made a living by hanging out with dangerous animals. I mean, EVERYONE saw this coming, right?

The Crocodile Hunter was a great entertainer, and he did a lot for education by presenting the world of zoology in a way that kids loved to see. For that, I'll remember him fondly. (I'm not so sure I'll remember his movie so fondly...I'll still take "The Gods Must Be Crazy" and "Crocodile Dundee" for my exotic comic adventures). In fact, the argument could be made that Irwin's legacy was to better inform the public about the truths and myths about the animal kingdom, thus better preparing the insulated public for encounters with the dangers of the natural world.

It's a little more reassuring to know that Irwin himself wouldn't feel sorry for his sudden departure. Apparently he made it very clear that if he were to ever get into a potentially fatal situation, his crew had strict orders to keep the cameras rolling. He seemed to aspire to the notion of going out in a blaze of glory. No word on whether his wife and kids felt the same.

I don't know, I don't just want to lambaste the guy with another "I told you so". I'm sure the world of Steve Irwin is getting plenty of those right now. The guy was hilarious, and will be remembered for a long time for some genuinely good work. My concern is the link between Irwin's persona and the culture of thrill-seeking today, which seems to push and push for a way to feel something because in the process we've numbed ourselves to the things that used to make us "feel" before.

Mary Buckheit of ESPN Page2 just published an article on Ultimate Fighting that covers much of this same ground. And like Mary, I also have to admit that despite the obvious criticism of our increasingly bloodthirsty society this kind of thing inspires, I too find the stuff mesmerizing. 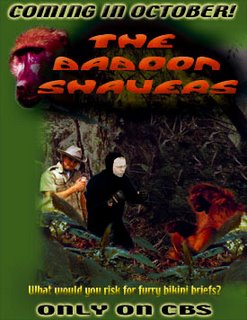 But maybe that's taking things on too far of a tangent. Steve Irwin is at least six degrees of separation from the UFC. So I think the best thing I can do to honor Irwin, then, is to finish with a link to the project he inspired in my own work, my parody of both The Crocodile Hunter and of our culture's rabid fascination with "reality" television: The Baboon Shavers.

Rest in peace, Steve.
Posted by The Professor at 9:14 AM