Lots of lines for Franco in "Flyboys" 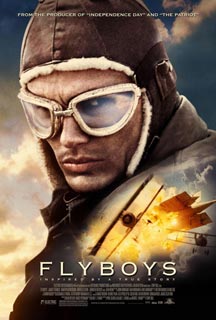 “Flyboys” is the latest “Pearl Harbor”-style attempt to merge the overdramatic big dumb action movie with the violent reality of shockers like “Saving Private Ryan”. I enjoyed the movie, but I can’t help feeling that all this technique does is alienate both ends of the spectrum. It’s too violent for families, but too hokey for hard-core folks.

Regardless of how the film does, it had to come as a relief for actor James Franco, who plays the lead hotshot pilot. “Spiderman II” was a great movie, but all Franco got to do was show up in random friend scenes and make out-of-place bitter Spiderman references. In “Flyboys”, Franco gets to fly airplanes, kiss French girls, and hardly ever has to bring up Spiderman.

The premise of the story is…well, it’s about a bunch of World War I fighter pilots that try to shoot down German airplanes. That’s it. Naturally, the good guys are a bunch of colorful misfits from diverse backgrounds. There’s “rich kid trying to make his dad happy” guy, “All-American boy that gets shell-shocked” guy, “poor orphan farm kid” guy (Franco), “black underdog ex-boxer” guy, and “possible German spy and eventual amputee” guy.

The best one is “ultra conservative Christian” guy, who embodies every tired stereotype of religious Americans today. According to “Flyboys”, everyone who believes in the Bible makes constant references to it in their daily speech, looks like Ollie from “Hoosiers”, and sings “Onward Christian Soldiers” while he shoots down the bad guys.

Of course, the cast wouldn’t be complete without “brooding bad boy” guy, the seasoned vet that goes out on solo runs to try to shoot down the Germans responsible for killing his original squad-mates.

That’s the goofiest thing about this movie: not the revenge thing, the idea that these pilots pretty much came and went as they pleased. At one point in the movie Franco gets in trouble for flying off to rescue his French girlfriend, but there’s no serious threat, since brooding bad boy guy has been coming and going at random for the whole movie. Then the hit man from “Professional” gives Franco a medal for it anyway.

This movie only works in a “turn off my brain” kind of way. The action was well-done, and outside of brooding bad boy guy’s pet lion (!), the CGI didn’t look too fake. My only serious gripe was the failure to use “Kashmir” on the soundtrack for the scene when the flyboys attack the German Zeppelin.

For all of the dedicated family men that will read this, (I don’t think any family women will…I don’t think any women read this blog at all, really), I have to issue a word of warning due to the violent content of the film. For a movie that plays off like “Memphis Belle”, bringing up swelling music for simple horseback rides, some of the air battles are pretty bloody. Not “Saving Private Ryan” bloody, but “did that guy just get shot in the eye?” bloody. Franco also goes Jack Bauer on a guy’s forearm, but it happens off-screen.

Outside of the violence, “Flyboys” is rated PG-13 for scenes of Franco making out with the French gal, some profanity, and having to watch the Christian dude forsake his rigid standards so he can get plastered with the boys.
Posted by The Professor at 10:55 AM