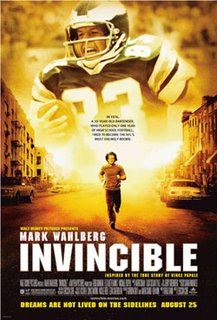 Picture this: Somewhere around 1995, Vanilla Ice leaves behind his fledgling rap career, and through a series of films like “Perfect Storm”, “Planet of the Apes”, and “Three Kings”, becomes a legitimate B-list actor. Oh yeah, Vanilla also has a pyromaniac brother in Menudo who gets a bit role as the guy that shoots Bruce Willis in “Sixth Sense”.

OK, now sub Mark Wahlberg for Vanilla Ice (and his brother Donny from New Kids on the Block), and you’ve got the Marky Mark story.

Well, Marky Mark just put out another movie, with a 1976 version of the Funky Bunch in tow. In “Invincible”, he plays real-life pro football walk-on Vince Papale, who played three seasons with the Philadelphia Eagles back in the 70’s. The film tells the story of how Papale steps away from his bartending gig, tries out for the team (thanks to an unprecedented open tryout put on by then-brand-new Eagles coach Dick Vermiel), and starts the 1976 season.

There’s not a lot of suspense in this one, since you know going in that he makes the team. The only surprises are saved for what happens when he actually makes it to the field. Kind of like a pro football version of “Rudy”, only without the Hobbit.

I’d slap this one down somewhere between “Remember the Titans” and “Friday Night Lights” on the “True Stories that Were Turned Into Football Movies” scale. “Remember the Titans”, or “Denzel Washington Makes the White Kids Get Along With the Black Kids”, was an enjoyable flick with a lot of glossy Disney overtones; “Friday Night Lights”, or “Billy Bob Tries to Shield His Disillusioned High School Football Team from Parasite Journalists, Tim McGraw and a Bunch of Locals with Nothing Better to do than Micromanage the Local High School Football Team”, was a grittier film that showed a lot more depth to its characters, as well as a lot more real-life struggle. “Invincible” wants to be gritty—and the it shows is certainly that—but the Disney folks put on a little too much gloss to take this film too seriously.

In fact, “Invincible’s” greatest strength is its look; its greatest weakness is its depth. The 1976 version of the Funky Bunch—Papale’s buddies at the local bar—are a typical group of underdog inner-city blue-collar no-names with great 70’s moustaches. There’s the “unemployed guy”, the “my union is striking and I’m worried about my job” guy, and the “I lost my brother in ‘” guy. Then there’s the “bartender with a big heart” guy—played by Joe Jr. from “While You Were Sleeping” (the “leaning” guy—remember?)—and his niece, the “gorgeous blond that hangs out in a South Philly bar with the Funky Bunch even though everywhere else she’d be doing cover shoots”. They’re fun characters, and the vintage 70’s soundtrack makes them all a likeable bunch, but we don’t really get to spend enough time with them to really generate any bonds.

No, mostly the movie focuses on Vince, who’s trying to fight off all his demons and take a shot at a dream he’s not even sure he wants. He’s a fantastic athlete for his age, but even though he lacks the ‘stache that seems to be holding his other buddies back on the job market, he just lost his gig as a substitute teacher (Note: the movie doesn’t clarify what exactly Vince teaches, which begs the question: which of your high school classes would you have been most surprised to have Marky Mark sub? Chemistry? Calculus? Driver’s Ed?) Not only that, but his wife just left him and called him a loser. His biggest motivation seems to be a desire to prove her wrong.

When you whittle it down, “Invincible” is just your basic feel-good underdog movie, and there’s nothing wrong with that. The characters are likeable, the sets look authentic, and the football hits sound brutal. (In fact, most of the football footage takes place in the local vacant lot, where Vince and the boys beat on each other without pads and throw each other onto the hoods of nearby cars). Surprisingly, the story is pretty true to life, too; at the (rather sudden) end of the film, flashback highlights show actual footage from the real Vince Papale’s career.

Speaking of which, I hear Al Davis is taking applications…

“Invincible” is rated PG-13 for cussing, Marky Mark making out with the blond, a bunch of violent football hits, and pervasive gratuitous 70’s moustaches.

Posted by The Professor at 4:47 PM