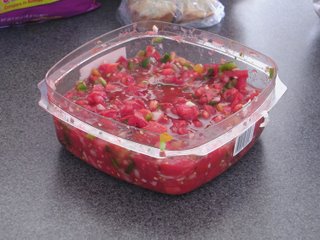 SALT LAKE CITY- History was made Saturday afternoon in the University of Utah Golf Course parking lot, where Josh was officially crowned champion of the First Annual Utetailgaters.com Salsa Contest.

"This has been a long time coming," declared the winner. "At last I am recognized for my superior intellect and sublime culinary skills." Josh punctuated the comment by standing on the hood of his car and pounding his chest repeatedly.

Josh's entry rose above six other stiff competitors by a slim voting margin to take the 2006 title. "It was neck and neck through the final round," said contest founder and fellow contestant Bryan Tippetts, "then we found a couple of people that hadn't voted yet, and for some reason they both picked Josh."

The winning entry was a largely traditional salsa, built on fresh ingredients like tomatoes, onions, and cilantro.

According to Josh, he only started making fresh homemade salsa this summer.

"I'd mostly been living off of handouts from friends and leftovers from my visits to Red Iguana," he says. "Sometimes I'll go down to the Farmer's Market and buy stuff from the Salsa Kings, but five bucks for an 8oz. container can get a little steep for an English teacher. So I just drove up to Brigham City and bought $25 worth of fresh vegetables so I could make my own darn salsa. It's not like it's hard or anything."

Not everyone was thrilled with the outcome of the contest.

"It seems a little shady to me," says fellow Ute Tailgater Landon Clark. "I mean, Tip pretty much gets off his death bed to be there, and Josh takes the title? I don't think he even comes to the games. What a jerk." 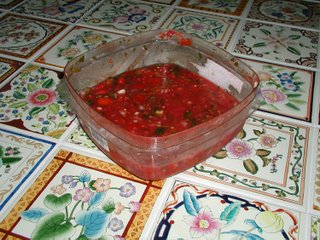 1. Chop it all up and mix it together. Real rocket science here.
2. Taste it. If there's too much garlic, use it to fight vampires.
3. Win local salsa competitions.
Posted by The Professor at 11:24 AM