On the night of June 27th, 1998, I sat in a fifth-wheel trailer in Island Park, Idaho, scribbling in a black ten-dollar hard-bound journal from Deseret Book.  I'd finished my first year of school at the University of Utah after returning from Chicago, and had just arrived at the family place outside Yellowstone for the first time since before I'd left. 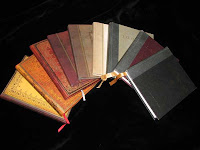 As much money as I've spent on camera lenses, computer equipment, and retro Air Jordan's, there is nothing as valuable to me as the ten journals I've filled in the last dozen years.  It's cool to think that I could go back to any day from that period and tell you exactly what I was doing.  All too often in life we worry about the things we haven't done, but journals are a nice way to remember what we have enjoyed.

Here are a dozen examples from the last twelve years:
Here are twelve things I'd like to accomplish in the next dozen years (assuming civilization is not wiped out by a zombie/robot apocalypse first):

Posted by The Professor at 9:57 PM