I am happy to report that my new relationship is going quite well.  It was over two months ago that I terminated my long-term association with KODJ 94.1, and so far the guys on Arrow 103.5 have yet to do any serious analysis of "Dancing with the Stars" or bring on their personal psychic mediums.

In fact, speaking of cosmic coincidences, it turns out I already have a history with my new morning show.  Jon Carter, one of the hosts, also used to do the morning show for Z-93, which was my classic rock show of choice back in high school before the station went country.  Familiar voices can be nice sometimes.

I actually met Carter a few years ago, though I didn't know it at the time.  I was standing in line outside The Depot waiting to get into the Steve Winwood concert with elBreto and The Other Josh when these two guys asked me if I wanted a free t-shirt.  I said yes, because you know, free t-shirt.  Then this other guy in line asked if I wanted to get a picture with the selfless souls who were out clothing the naked.  I said OK.

Later I learned one of the t-shirt guys was Carter. 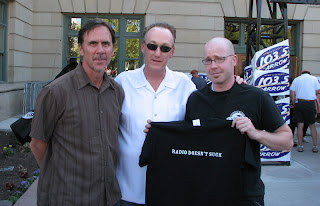 PS: About six months later I was wearing the free shirt at a ward Scripture Study activity one Sunday night when Elder David Bednar of the Quorum of the Twelve Apostles showed up.  He didn't say anything, but I could tell he was relieved that the youth of the Church was staying true to its media roots.
Posted by The Professor at 9:20 AM