For someone whose livelihood is based on words, I spend a lot of time stressing about numbers. Maybe it's born of a deep personal insecurity, but I've always been the kind of guy who kept track of his stats.  Sitting here right now I can tell you that I never shot over 50% on my free throws during a season of church ball. I can tell you that the most points I ever scored in a Junior Jazz game is 24, and that my max bench press is probably about 20 pounds less than it was six months ago.

I can also tell you that I've attended 10 LDS temples and dined at 9 Hard Rock Cafes (Call it the "Saint/Sinner Equilibrium"). The first wage I ever earned was 25 cents for every 12 bunches of radishes I picked at a local farm. For years I thought my best mile time was 5:45, until people started casting doubts on the measuring system my Centerville Junior High gym teachers were using in the early 1990's.

I used to keep stats on my dating, too. I know that my first one took place the evening of December 5th, 1992, an unmitigated disaster featuring Spaghetti Factory meatballs, a ceiling-mounted Christmas Tree and a legendary group photo at the State Capitol*. But that one was a girl's choice dance, so my first real date probably took place a week later when I got up the guts to ask a girl out on my own. For a long time I could blast out a complex stat sheet on my total dating career from memory, complete with notations for repeat outings, disqualifications via marriage, and whether I got action at the end of the evening (or just watched the girl sprint for her front door). The precision of those stats has floated into the historical ether, but I can still estimate with some accuracy that since December of 1992, I've taken 200-300 girls out on 300-400 dates. And if you figure I spent an average of $25 on each one--probably a lowball estimate--I've thrown about eight or nine grand at the ladies over the years.**

I think I first started keeping track of my dating stats for the same reason I tracked my Jr. Jazz stats in high school: I felt insecure about my performance, and was searching for some concrete evidence of improvement. Something to point at with pride. If I really wanted to, I could comb back through my journals and get my exact numbers--I haven't missed a daily journal entry since June of 1998--but I don't. Because the bigger those numbers get, and the older I get, the less impressive they become. Now, instead of looking at the totals and thinking, "what a pimp," I look at the totals and think, "what a schmuck." If the goal was to become a player--or a "serial dater," as I have been accused of being--then I have been successful. But that wasn't the goal. The goal was to get married, and thus those stats become a damning measure of futility. Dan Marino's 62,000 passing yards without a Super Bowl win instead of Bill Russell's 11 NBA titles.

My passion for stat-tracking has faded in the last couple of years, as dating has become a different animal. I still talk about it with friends, and obviously I'll even blog about it on occasion. Heck, I even wrote a book on the subject (Still waiting to hear back from the publisher on that one...).  But something feels very different now than it did five or ten years ago. It could be that I've finally matured a bit, or that I just don't care as much. Either way, the Great Mormon Singles Quest doesn't feel the same way it used to, so neither does the impulse to track it. 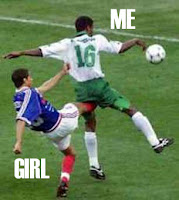 The first time I noticed this feeling in a tangible way was two February's ago. I was coming off a first date that was an all-timer, and a follow-up that was almost as good. I'd had good dates before, but this campaign truly showed promise and even reciprocation. Then, after wrapping up a broadcast of my morning show, only moments after grabbing some take-out stir fry and jumping in my car, I get a text announcing that my would-be girlfriend is now dating someone else.

I really can't understate this: I thought this one was going to work. The rejection was truly a surprise. There had been plenty of times I had gotten my hopes up, yet known that success was still a long shot.  This one hadn't felt like those.  And yet, I didn't react with anger or sorrow or really anything. I didn't call to plead my case, drive to her apartment to confront her, or immediately call another girl out of spite to convince myself that I was still The Man. Because I'd tried all that before, and none of it made all that much difference. I knew there wasn't much to do besides drive home and enjoy my Teriyaki Grill take-out. Obviously I was disappointed, but I wasn't despondent. If anything, I had become comfortably numb.

I have no idea what that means, but I'm pretty sure you can't put it in stats.

*I should also mention that the unmitigated disaster was mostly my fault.  As in, I probably never should have told my date that I was bored halfway through the proceedings.  Hey, I was a rookie, right?

**It occurs to me that when guys complain about dating, one of the knee-jerk gripes is always the financial investment involved.  I realize it sounds a little shallow and cliche, but there is a certain amplified angst that comes with the realization that not only are you getting your tail whipped regularly in the metaphorical cage fight of the dating game, but that you are paying your opponent to do so.
Posted by The Professor at 10:32 AM