The Last Ride of the Renaissance Cowboy

I have two favorite photographs of my grandpa. The first was taken about thirty-five years ago out in western Davis County, probably the Woods Cross area by the looks of it. Grandpa is alone on horseback riding through a snow-covered pasture. It’s a classic shot; looks like it should be on the cover of one of the Louis L’Amour novels he kept up at his place in Island Park.

This photo is Vintage Jess; it shows the Grandpa I knew as a small child. The one who owned horses and had a huge gun rack in his basement. Before writing his obituary last week, I re-read the personal history he wrote back in 1992. So much of his life had taken place before I was born, and I really wanted to make sure I got it right. I’d read the history before, so I knew about his mission to the Eastern Central States and the time he spent in the South Pacific during WWII, but this time I began to notice different trends emerging.

For one thing, I was astounded at Grandpa’s capacity to excel at a wide variety of jobs. Over the course of his life, here are a few of the things he did professionally:

Still, in spite of all that, it doesn’t feel enough to call him a Jack of all Trades, or even a Renaissance Man. When I look at that photo of him on the horse, I think that my grandpa was more of a Renaissance Cowboy, a classic self-made man. A genuine relic of the pioneer era of the Old West.

Because while the number of jobs was impressive, the trend that ran through them was more impressive: most of his opportunities were created with his own initiative. Grandpa was not the kind of man to sit back and let life happen to him. He was the kind of person who not only got involved, but actively tried to create opportunities for himself and others along the way.

His do-it-yourself attitude is at least partially responsible for the stubborn streak that runs through our family like a rookie bull at a rodeo. When Grandpa was about seven years old he informed his parents that he wasn’t going to go to church anymore unless he could wear his overalls. He said knee pants were for sissies. His taste in fashion lasted throughout his entire life, as is evidenced by the pair of snakeskin cowboy boots that currently sit at the foot of his casket.

His distrust of doctors is also notorious. On his way home from his military service, the malaria he’d contracted in the Pacific flared up, and army medics were about ready to get him off a train in Nevada to get him to a hospital. But my grandpa would have none of it. He just told them to keep piling on blankets and stay on course. No doctor was going to tell him what to do, and in the years to come, few ever did.

Grandpa may have had a stubborn streak, but his headfirst attitude is also responsible for my existence. My favorite story about Grandpa takes place shortly after he returned home from World War II, when he had to come to Salt Lake to report to Elder Harold B. Lee. Since his family was still in Idaho, Grandpa had to find someone local to crash with, and he wound up staying with the family of this girl he had written a few times while he was away. Then he managed to talk her into driving him into Salt Lake for his meeting, and before she knew it, the two of them were sitting in Elder Lee’s office while he talked about his war experience.

When he was done with his report, the apostle asked the two of them about their relationship. Since they’d only written a couple of letters and been on maybe one date, there wasn’t much to say, but the apostle told them he thought they made a good couple, and should probably give things some thought.

Fifteen minutes later the two of them were sitting outside in the car having the 1940’s equivalent of a DTR talk. As they talked over their options, Grandpa dropped this line:

“I don’t know that I love you, but I know you’re the kind of woman I’d like to have raise my children.”

This line has never worked for me, but within a week, my future grandparents were engaged.

Of course, that was Grandma’s side of the story…this is what Grandpa wrote in his personal history:

“I went to see Apostle Lee to report about the LDS servicemen at Camp Beale. I took Edith with me and after our visit, we were forced to evaluate our feelings concerning each other. I returned to Idaho Falls and my family. Soon after I returned to Woods Cross, Edith and I became engaged.”

It may not have been a romantic start, but if you’d ever seen them in the last five years, you’d have thought they were crazy about each other on sight.

And that leads me to my other favorite photo of Grandpa. A year and a half ago, while Grandma was going to dialysis twice a week, I used to go over and hang out with Grandpa for a few hours on Mondays while she was gone. I’d usually arrive to find them in the middle of a little routine. Grandma would sit on the stairs, dressed up in her jacket, while Grandpa would stand like a sentry at the front door, peering out into the road to watch for the bus. To an outsider they would have just looked like a cute elderly couple, but anyone who knew their history would see something much more special. The two of them were about as feeble as they could be, yet they were both still looking out for each other, helping each other with their jackets or getting up and down the stairs, getting on the bus or getting each other a new glass of ice water. They were a team, completely dedicated to serving each other. It’s the way they had always been. 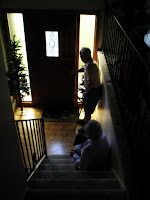 One day as they were in their regular positions I pulled out my camera and tried to capture the moment. It’s not the greatest shot I’ve ever taken, but it might be the most meaningful. It tells me a lot about faith, and loyalty, and love. It tells me that life is about taking risks, and how those risks can pay off.

Grandpa was able to take those kinds of risks because he had great faith, and he had a strong testimony of the Gospel. Here is what he wrote in his personal history:

“In my life, there have been many times I have seen the power of God manifest, not only in healings, but in giving me light that I have needed. I have been inspired to say and do many things by the Lord. My prayers have been answered and I know that God lives, that Jesus is our redeemer and that Joseph Smith is a true prophet of God.”

As much as anyone I know, my grandfather understood the balance between the initiative we need to take in life, and the faith we need to put in the Lord in order to succeed.

Several hours after I delivered the preceding at my grandfather’s funeral, I was sitting with my buddy Breto at the Coldplay concert watching one of their opening acts. When I drove to Grandma’s funeral earlier in the year, a Rolling Stones song called “Shine a Light” had come on my stereo, which seemed poignant since my only previous funeral experience had been watching the opening scene in “The Big Chill” where a group of friends drives to a funeral while the Stones’ “You Can’t Always Get What You Want” plays. It had occurred to me after Grandpa’s funeral that I hadn’t listened to any similar Stones’ song on the way to his funeral like I had for Grandma. 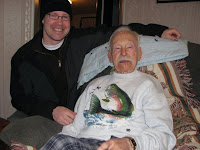 Then the lead singer got up near the end of their opening set and mentioned that they’d been messing around with a song on the drive through the Rocky Mountains. It was the last night of the tour, and he said they’d decided to try it out on us. The song was a cover of an old Stones’ song off the “Sticky Fingers” album called “Wild Horses”.

As they started into the old cowboy ballad, I sat back in my chair and smiled. If there was ever a Rolling Stones song tailor-made for my Grandpa, it was “Wild Horses”. I doubt I’ll ever hear the song again without thinking of him.
Posted by The Professor at 9:21 PM