When I was writing my humor column for the student newspaper up at USU, there were a number of times I was tempted to take a stance on a serious political issue. When you're a white conservative Mormon getting a master's degree in the humanities, you encounter them often.

But every time I felt that temptation, I eventually set it aside. Not because I was afraid to speak my mind, but because I realized that partisan political commentary was not my role. My column was a respite from that battle, not a participant. When you live in a world that is saturated with bitter vitriol over all sorts of important political and social issues, you can feel burned out. You need a break. So in the same way that pulling out one of my old Far Side galleries used to help me re-set my internal perspective meter with a little well-needed humor, I wanted my columns to provide that necessary escape for my readers. Obviously they would be a vehicle for social commentary, but I wanted them to be a vehicle that welcomed both sides, and offered criticism in a way that would remind people that we're really all in the same boat. 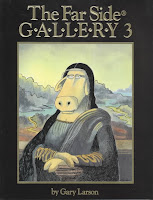 Four years later, as I spend nine or ten hours a day saturated in the world of the news media, I feel the same way. I realize that I may only have a few readers, and I realize that the social responsibility of some generic Google blog is painfully small, but I still need that respite, and I think my few readers do too. I'm also thinking that this blog hasn't been very funny lately--probably because it's reflecting my current status in life--and diving into politics isn't going to help that much.

So instead of go into a lot of detail over what's happening in the world of politics right now, instead of getting elated over the historic nature of this week's election--or the apprehension that is the other side of the coin--I just want to make one comment about my own experience this week, and then promise to reassert myself in the task of making you laugh.

This is probably the first presidential election I can remember where I have honestly felt like the outcome was going to make a direct impact on my future.

If that's true, I fully intend to retain my sense of humor. And whether you're on the right, the left, or a part of the vast confused sea of "undecideds" in the middle, I think you can agree that we're all going to need it.
Posted by The Professor at 5:59 PM