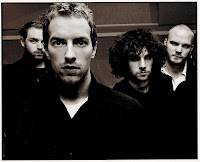 Last weekend, Breto and I dropped by the Arena* to see Gwyneth Paltrow’s husband play some tunes with a few of his friends. For a guy who named his kid after a fruit, Chris Martin can write some pretty good songs.

But as good as the music was, what impressed me most about Saturday’s concert was the focus that the band put on the audience. Coldplay is one of the biggest arena acts on the scene, yet they seemed to bend over backwards to make sure the fans were having a good time. Whether it was Chris Martin constantly pouring his heart out to the crowd in between songs, showering the arena in butterfly-shaped confetti during “Lovers in Japan”, or running up into the stands to play “The Scientist” on the opposite end of the arena, Coldplay made it clear that they wanted everyone to get their money’s worth. And most importantly, they looked like they were having a lot of fun doing it.

Then again, my perspective on Coldplay has always been a little different than on other bands. After the show, Breto and I ran into his old friend Mattie, who used to hang out with the band back in their “Parachutes” days. I even have a copy of a picture of her sitting with them on a couch. Even that small connection brings the band down to earth a little bit, but in a good way.

About the only criticism I’ve ever heard of the band is that they sound too much like U2, another band that goes out of it’s way to involve the crowd. It’s true that there are a few sonic similarities, but I don’t know that there’s any act out there with musical roots you couldn’t trace back to some other band. I’m much more impressed with the other things Coldplay has in common with U2, namely their sense of performance and drama.

Like U2, The Killers, and even The Who, Coldplay has an anthemic sound that makes their music very cathartic, especially in an arena filled with fifteen thousand people. As crazy as things have been lately with the economy, the political world, and the tension with post-election fallout, it feels pretty good to hear some big-sounding anthem music. Epics like “Clocks”, “Viva la Vida” and “Fix You” just about blew the roof off the arena.

The only thing that was off was opening act #2, a DJ named Jon Hopkins. After a solid half-hour set from a band called Sleepercar, whose cover of the Rolling Stones’ “Wild Horses” turned out to be one of the evening’s personal highlights for me, a big video screen on stage started doing a movie reel countdown to what everyone in the arena thought would be Coldplay’s dramatic entrance. Instead this guy on stage started cranking out bizarro DJ beats while Pink Floyd-esque acid trip animations cycled through on the screen, and after ten minutes when everyone finally figured out that Coldplay wasn’t coming out on stage, his goose was cooked.

But then during the following break, Srauss’ “Blue Danube” swelled to a roar on the PA, the house lights fell, and “Life in Technicolor” announced the main act. It was all cool after that, right through to the encore finale of “Yellow”. I'd heard rumors before the show that it was the last of the tour and that the band might even be breaking up next year. If so, they finished in style; if not, then I can't wait for them to come back.

The Year of the Concert is alive and well.

Next up: Mr. Neil Diamond

*Short for “Energy Solutions Arena”, formerly “The Delta Center”, formerly “Vacant Lot off 300 West”
Posted by The Professor at 1:08 PM