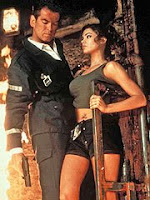 For me, the James Bond Franchise hit it's low point when they cast Denise Richards as a nuclear physicist in short shorts. Or it could have been when they took that gorgeous BMW M5 and trashed it without even giving it any legit screen time. In both cases, Bond had become a sad, cliched parody of his former glory, spouting off out-of-place double-entendres and generally being lame. Supposedly the Halle Berry movie was a step back in the right direction, but I wouldn't know...I never saw it.

Enter the Daniel Craig era. Ian Felming's iconic Bond is no longer tall, dark and handsome. Now he's tallish, blond and really, really angry. I thought "Casino Royale" was a lot of fun, though it had too many false endings. Definitely got things back on track.

"Quantum of Solace" keeps the train-a-rollin'.

QOS drops you right in the middle of a car chase, picking up right where the last movie left off. This is good and bad. Cool for continuity, but bad because I only vaguely remember all the details from the first one. I remember a poker game, a black CIA agent, and a Bond Girl dying in a Venetian house sinking. I do seem to remember Bond confronting some dude outside a villa at the end.

Yeah. The dude from the end is Bond's prisoner at the beginning of QOS, and we find out that he is part of a secret-secret-secret group that all the secret-secret groups don't even know about, though they "have people everywhere". They're also responsible for that other Bond Girl's death...somehow. Plus they're trying to get a lot of oil and they have ties to the ex-dictator of Bolivia.

OK, so "Quantum of Solace" boils down to this: Blond James Bond is really mad at the secret-secret-secret group who killed his sort-of girlfriend and wants to control the world's oil supply with the Bolivian guy, so he spends about two hours killing everyone he comes across who is connected to them.

That's really about it.

Not to say I didn't enjoy the movie. No, I just didn't have any clue what was going on most of the time. This was probably due to the combination of the "action sequence every 2.6 minutes" script policy or the dude sitting behind me who kept crawling over the empty seat two places down from me to go check his stupid cell phone every ten minutes. When you watch two hours of wanton physical violence, you get bad ideas about how to deal with clueless moviegoers.

QOS is a fun movie, and this year, outside of a couple of striking exceptions, that's been hard to find. But I'm still not entirely sold on the "ultra-cold merciless killer" Bond. The Batman treatment may have saved the Bond Franchise from total irrelevance, but I hope they don't push it too far.

"Quantum of Solace" is rated PG-13 for tons and tons of violence and explosions and other cool macho stuff, some swears, a really distracting scar on the back of Bond Girl #1 which never really works into the plot though it looks like it's supposed to, and this scene where we find out that Bond Girl #2 has been killed by having oil dumped all over her (in homage to the gold girl in "Goldfinger").

(Editor's note: Now that you've read the review I want to tell you that my first idea for the review title was "Blond on Bond", but I thought it might dissuade people from reading it. But I wanted you to know that I thought of it. I thought it was pretty good.)
Posted by The Professor at 11:02 AM