When gas prices finally began to settle late last summer, I refused to get too excited too soon. Every previous dip had been followed by an even nastier spike, and suffice to say, I harbored no trust for the economic masterminds running the gas business. Until the price dips below $3.00, I told myself, I won’t acknowledge any bubble bursting.

Well, I just drove past a Maverick station that was selling unleaded at $1.59 a gallon, and from what I understand, we Utahn’s are still paying more than the national average. It appears the bubble has burst…and taken my mutual funds with it.

At one point last summer I briefly considered the prospect of buying a motor scooter, not unlike the classic Vespa Toad drives into a garbage can at the beginning of “American Graffiti”. Eventually Toad scored the cute blond, so going the scooter route can’t be that bad an idea, right? Surely a scooter couldn't harm my machismo anymore than owning a copy of "Serendipity" or listening to the occasional Carpenters tune already has?

Well, my scooter flirtings never materialized, but I did get an exclusive peek into the vast scooter underworld on a recent Suarez around the greater Salt Lake area with my buddy Chidsey. Chidsey and I were on a mission to acquire blank DVD’s to help in my efforts to digitize several years’ worth of Jazz Bear jumbotron clips, and on our way back to the arena, we dropped by a scooter shop to check on a repair job. 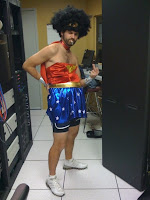 See, a few years back, long before our current economic crisis, Chidsey decided to pick up a scooter, because that’s the kind of thing he does. He also goes to see “Evil Dead: The Musical” and dresses like Wonder Woman for Halloween. Chidsey acquired said scooter through alternative channels, secured through a contact made at a scooter convention he attended in Salt Lake. (The answer is yes; there are conventions for scooter enthusiasts, just as there are conventions for Star Trek geeks and Amway salespeople). This contact led him to Holladay and an old man named Buddy, whose backyard featured the scattered remains of approximately two-dozen Vespas. One thousand dollars later, Chidsey left this backyard with a machine that didn’t quite run and didn’t quite have a title.

This was the machine we had come to the scooter shop to check on. Chidsey dropped the thing off back in August, and by mid-November was still waiting for the return of his ride. Where I come from (Bountiful), we call this “lousy service”.

When we entered the shop, we were met with a dazzling array of brightly colored motor scooters, all shined up and ready to hit the road at no more than 40mph. We made our way past all the tempting little machines to the service desk at the back, which was manned by the kind of guy who used to smoke pot behind your high school while quoting Allen Ginsburg. Actually the whole place was manned by these guys, which made you surprised that they still had anything in stock and hadn’t just gotten bored and given them all away one lazy Tuesday.

When Chidsey identified himself and described the scooter in question, the service guy’s eyes brightened a bit and he said this:

“Yeah, that one’s coming along.”

At this point I need to mention that I admire Chidsey for not reaching across the counter and pulling the scooter boy over it by his naughty bits. Because to me, “coming along” is an unsatisfactory explanation for a three-month service job on a 40-year-old piece of machinery that runs on what appeared to be a weed whacker engine. 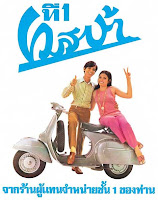 But I could be wrong. Perhaps in the world of secondary transportation, speedy response is not a high standard. Maybe scooters are kind of like Ferrari’s, and need the tender hands-on attention of a seasoned expert, the kind of guy who, say, keeps a lot of spare parts strewn around his backyard.

But there’s another part of me that feels like this guy was a symbol for life in general, at least the part of it that is out of our hands. You can try to control everything in your life, you can try to micro-manage, but ultimately, whether it’s gas prices, the stock market, or my prospects for a third roommate to cover my lease, there are aspects of an advanced society that always seem to wind up in the hands of a stoned beatnik with a lot of time on his hands. We can try to learn patience, or we can beat the beatnik into bloody submission, but neither option is going to get our scooter back any quicker.

At least when we do get it back, it won’t break the bank to fill up the tank.
Posted by The Professor at 7:11 PM