The Zen of Weezer

There's something about being crushed in a crowd of 2,000 people that makes you feel acutely alive. 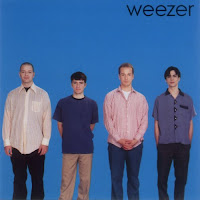 The year after I graduated from high school, back when people bought CD's, I worked at the old Wherehouse Music on 5th south in Bountiful. One of the new CD's we listened to over the store PA was an obscure collection of power-pop hooks that sounded like they were sung by our high school's physics geek. They were catchy and fun, but many of us thought the band would be little more than a flash in the pan.

"A year from now," said my friend Cody, "the used bins are going to be filled with copies of this CD."

For a while Weezer did fade away, until their green album in 2001 launched them back into the spotlight. Considering that they've been recording for 14 years now, it's a little strange to think that when I saw them at the E-Center Tuesday night, they were probably the first band I ever saw "in their prime". But I think that has more to do with what Weezer represents. Rivers Cuomo may be pushing 40, but he's still the undisputed voice of adolescent nerd power-pop. So in a way, seeing Weezer this week felt like I was reclaiming a portion of my lost youth.

Tuesday's concert started shortly after 7:30 with a half-hour's worth of music from Alkaline Trio. They were followed by Angels and Airwaves, the spin-off band from Blink-182. Their music and performance was a lot of fun--they sound a lot like The Killers--but I still struggle with Tom DeLonge's deliberate off-key vocal style.

It was around the time AVA took the stage that the crowd scene got interesting. I'd picked up general admission tickets thinking that Weezer might be a fun band to experience in a throng of people. My buddy Tyler and I got there early enough to get about fifteen feet from the front railing, but when AVA kicked into gear, people started shoving around, and suddenly Tyler and I found ourselves staring at the back of a lot more heads. Heads that were inconveniently tall.

So when Weezer took the stage and the shoving got even more intense, I resolved to take advantage of the situation. Instead of let the crowd move me back, I muscled my way forward as Rivers sang "My Name is Jonas" and "Say it Ain't So", and within about ten minutes I was five feet from the front railing, and fifteen feet from where he stood on stage. I couldn't breathe or move, and the rest of the night was spent pushing in one direction or another to offset the force of the crowd. 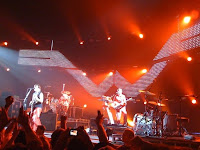 It was a blast.

Throughout the concert, security had to reach in and pull people out of the crowd who couldn't take the pressure. Some kids were getting mashed against the front rail, others crowd-surfed their way out, and a few poor saps were there on dates. One girl fainted right in front of me, and I had to pull her back to her feet before she got swallowed up in the melee. I just went with the flow, twisting with the crowd and jumping up and down to "Pork and Beans" and "Hash Pipe". It didn't matter that I was sweating like crazy, or that everyone around me was sweating like crazy. The music was great, the night was great, and as everyone's daily grind was forgotten for three hours, we all felt happy. 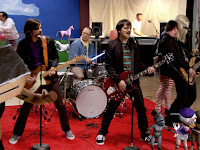 In a way, the experience was a metaphor for life. When I tried to avoid the conflict, people shoved in front of me and I suddenly found myself out of the picture. But when I started pushing back, a little persistence and patience eventually landed me in a position that was more promising than I had expected going in. Instead of get bent out of shape because I was shorter than the tall dudes in my way, I used my size as an advantage to get ahead of them. Weaknesses became strengths.

Rivers would have been proud.
Posted by The Professor at 2:05 AM