"Traitor", and the Perception of Reality

We don't always mimic what we see on the big screen, but movies do have the power to shape our reality. That's why I'm still thinking about the movie I saw last weekend. "Traitor" is about an American Muslim who sells weapons to terrorists. It stars Don Cheadle, who played "Basher" in the "Ocean's Eleven" movies. But this time there are no swank suits, and there's no hip soundtrack. "Traitor" is about the conflict between faith and duty. It is an excellent film…it's smart, stylish, and it's got a great story. In fact, I can't tell you much more about it without giving too much away. 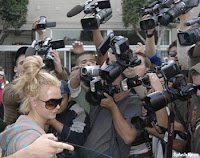 Now most of us understand that the media plays things up for effect. The only thing real in reality TV is that the people aren't computer-generated. Yet. But we spend a lot of time watching the media. We've all heard the numbers on that. So I wonder what it's doing to me. Our culture loves stories. We love true stories, made-up stories, and stories about Britney Spears, which are a little of both.

But we have to be careful. Lots of time people wish their lives were more like the movies. But sometimes, deep down, we really believe they are.
Posted by The Professor at 10:51 AM