Earlier this month, my sister married my roommate. Not only is Katie my only sister, but she's also my only sibling, so this was a pretty big event for the clan. It was also a faith-promoting event on several levels, and I say that without my usual dry sense of humor.

The story of how Katie and John got together is a great one, not to mention an epic one, which I tried to demonstrate in their wedding video. They were more or less best friends for ten years before they started dating, and the resulting marriage is one of those marriages that make you feel better about the world. You know, because most don’t. (There’s that dry sense of humor again…)

Not only was their story faith promoting, but so was the reception. As opposed to the standard Utah reception, Katie managed to inject a high level of her personality into the event, which resulted in a proceeding that even a weary veteran of the reception scene like myself could enjoy. Glass vases full of bright red Peeps, Tim Burton-esque table set-ups, and a killer Jazz combo gave the night a unique sense of class. Definitely worthy of my little sister.

In the meantime, her older brother is still far removed from any reception design plans of his own. Gratefully, only a few guests made the inevitable reference to my marital status during the festivities, which was lucky since I still don’t have a clever answer for the “why aren’t you married?” question. If my life were a movie, I’d have a quick one-liner on hand to dispatch nosy guests; in reality, my thoughts on the subject are usually too muddled to be coherent.

Speaking of which, last weekend I watched "High Fidelity" again, and for the last few days I've been in a John Cusack-like existential haze. The first time I saw the film, I didn't like it too much. I'm a big Cusack fan, but I thought his character was too self-absorbed and neurotic to spend two hours with. But now that I'm more self-absorbed and neurotic myself, it's a lot easier to relate.

In fact, one aspect of the film absolutely fascinates me: the fundamental notion that one way to solve your current relationship problems is to contact all your past flames and find out why they dumped you. As a chronic journal-writer and hopeless masochist, this idea appeals to me. In the movie, Cusack seeks out all the girls who have broken his heart in the hope of discovering what he lacks as a boyfriend/husband/human being. But what he finds is that he has greatly misinterpreted his past relationships, that there were situations when it was he who did the dumping, situations where the person dumping him was doing him a huge favor, and situations where he actually needed to show a little more commitment and trust. In short, he had his issues, but the long-term path was working out just the way it was supposed to. It was perfect in its imperfection.

I've often found myself in the same situation. There is a sick part of me that wants to go back and ask the women of my past why things didn’t work out. But I never do. Partially because I don't want to find out that I got rejected for being bald or nerdy, but mostly because I can't help but think that in spite of Cusack's celluloid adventure, mine would just result in a lot of painfully awkward conversations. Besides, even if John's experience isn't realistic, the lesson he learned is. I've gained enough perspective over the years to realize that most of the time, my failures were blessings in disguise, and that even though I blew plenty of opportunities, those gaffes were meant to be learning experiences, and that they're all leading on a path towards a yet unseen destination. 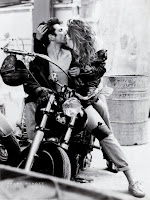 For Cusack it meant getting him back together with the lawyer. For me, who knows. It might lead me back to the waitress I saw at The Bluebird when I was fourteen. It could mean getting together with the mythic biker mama of my dreams, ready to ride off into the sunset with me on her Chopper of Love. I suppose there’s even a remote possibility that I’ve got a longtime friend who will switch gears on me. Regardless, if I’ve learned anything from life in the last ten years, it’s that things work out the way they’re supposed to. We just have to maintain enough perspective to appreciate it.

And in that sense, I guess the only true answer to the “why aren’t you married?” question is this:

Timing.
Posted by The Professor at 5:20 AM