Of Coots and Codgers

Last month up in Yellowstone, I was heading out from my grandparents' cabin on a dirt road when I passed this old guy on a four-wheeler. As I drove past I slowed down and gave him that little wave that everyone gives when you see other drivers out in the country. But instead of wave back, this guy just glared at me and jerked his hand towards the ground, cause he wanted me to slow down.

As I drove by, I muttered something about this guy just being an old coot. But then I thought about it some more, and I thought that he probably wasn't an old coot. He was actually an old codger. As best as I can tell, the difference between a coot and a codger is that a coot is a crazy old man, and a codger is just a crusty old fart who won't die.

In the world of fiction, the best example of the old coot is Don Quixote, the title character in the book by Cervantes. Quixote is a senile old man who decides he's a knight and rides off on a donkey with a shaving bowl on his head to fight windmills. He’s crazy, but he’s also a loveable character who reminds people to keep cynicism from overwhelming childlike wonder and idealism. 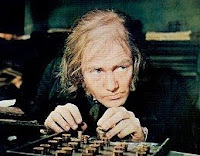 On the flip side, the definitive old codger is Ebenezer Scrooge, the guy who sold his soul to the almighty dollar, wound up all lonely and paranoid, and then started hanging out with ghosts.

In real life, two of my biggest influences growing up were Ray Bradbury and George Lucas. I actually got to meet Bradbury at Comic-Con 2007 in San Diego, and I ran into George Lucas at a mall in Chicago last June. After meeting them both, I think they work as real-life examples of my coot/codger theory.

Meeting Ray Bradbury was like meeting my grandpa. In person, he comes across exactly like he does in his books. He speaks with a lot of enthusiasm, kind of like a little kid, even though he’s in his 80's. He's not crazy, but a guy that old who wears shorts is definitely in coot territory.

On the other hand, meeting George Lucas was a scary experience because I thought he might pull a tazer on me if I tried to talk to him. Lucas is a fiercely independent artist who fought his entire career to do things his own way, and in the process he wound up making himself a social island. He’s prime codger material. 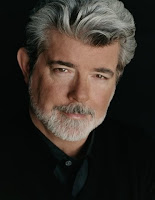 If it were up to me, I'd rather be a coot than a codger; coots might be nutty, but at least they're happy. But I'm worried that I'm going to wind up a codger because of my driving habits. You can divide all drivers into two categories: oblivious drivers and aggressive drivers. Oblivious drivers park in the fast lane and only use their turn signals when they bump the handle while they’re reaching for their cell phones. Aggressive drivers tailgate them and have high blood pressure. I’m pretty sure all the oblivious drivers will wind up coots, and the aggressive drivers like me will turn into old codgers who pull guns on you when you try to take their car keys. 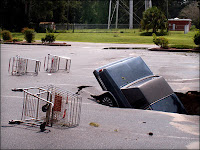 So if you think about it, that old codger in Yellowstone was the future me shaking his fist at the current me, and that kind of blows my mind. It's kind of like I'm an existential self-loathing hypocrite...but maybe I can be a lovable old idealist who isn't crazy and still knows enough to get out of the fast lane when someone comes up behind me, if that's not shooting for the geriatric moon.

Maybe the whole point is that we shouldn't let other people's actions determine our personal happiness...or maybe I should just drive slower on dirt roads.
Posted by The Professor at 1:55 AM