We are all going to die…maybe as soon as next week!

Next Thursday, a group of scientists in Europe are set to fire up a machine called the Large Hadron Collider. The “LHC” is a massive particle accelerator in Switzerland that bounces sub-atomic particles off each other at super-ridiculous speeds. Kind of like an intergalactic washing machine. The scientists built this thing to create something called a Higgs Boson Particle, which may or may not exist. But the LHC also has the potential to create black holes.

Those of you who watched the Disney movie from 1978 will remember that Black Holes are huge vacuums in outer space that are so powerful they suck in all nearby matter, even visible light, and then they spit it out on the other end of the universe where ET lives. 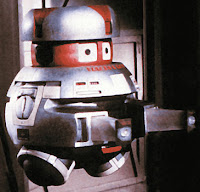 That’s what these guys want to create in Switzerland, only they don't have any floating R2-D2's to save the world if things go bad.

The LHC people are trying to assure us that everything’s cool; they even put together a really bad rap video to explain how it works. But we know better. If movies have taught us anything, it is that whenever you experiment with science, bad things happen. 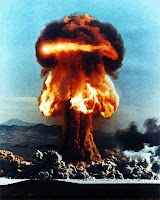 Whether or not you’re a religious person, it isn’t hard to believe that the end of the world will come because we screwed something up here on Earth. We’ve proven to be fully capable of bringing about our own destruction, whether through nuclear holocaust, biological weapons or the mind-numbing degrade of reality television. It’s possible that in my extensive study of the scriptures, I missed some obscure passage in the Old Testament that says, “and it came to pass that the two guys in lab coats fired up the super collider machine, and the whole Earth was sucked into a spot one-millionth the size of the head of a pin. Amen.”

So, when you consider that the end of the world could come at any time, it makes you start to wonder how people function from day-to-day without wigging out all the time. I think the answer has to do with learning to separate your worries between the things you can influence and the things that are out of your hands.

If those guys are going to destroy the planet with their portable black hole, there’s really not a whole lot I can do about it. Unless my life was a Hollywood movie like “War Games”. Then I’d pack up my brand-new girlfriend and my zany best friend and fly to the Swiss border, where we would infiltrate several layers of military security with a leatherman tool and save the planet by making an impassioned speech to a scientist who conveniently speaks English. But that’s not the case.

No, I think it’s best to just push forward with life and follow the wisdom of legendary football coach John Madden, who used to say, “Don’t worry about the horse being blind, just load the wagon.” Life’s too short to spend it worrying about how it’s going to end; we may as well make the most of it. 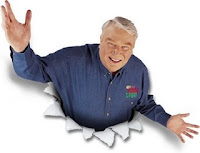 But I might keep a leatherman on me, just in case.
Posted by The Professor at 3:00 PM