I'm not a breakfast guy. Never have been. I love bacon, but I've never been very keen on eggs, pancakes, waffles, any of that stuff.

The only breakfast staple I can claim any kind of experience with is cereal. That's about all I ever ate for breakfast when I was a kid, so I feel somewhat justified in writing about them.

Here are my results for the first and only Breakfast Cereal Olympics. Since they are my own Olympics, and not any real kind of sanctioned Olympics, I'm going to give out awards for the worst entries as well. We'll go with them first, so this entry will have a nice "negative to positive" tone arc.

I can't think of any cereal that's a bigger scam than Wheaties. For years they've been playing off this athletic image, plastering the Jock-du-Jour on the box and jazzing it all up so that kids are totally convinced that eating their cereal will propel them to professional sports greatness. Then they open up the box expecting the greatest thing this side of performance-enhancing drugs, and instead find one of the most colossally lame excuses for cereal that ever lined a grocery aisle. Dumb brown flakes. Utterly flavorless. Nothing that even hints of Michael Jordan. The only thing you get by eating your Wheaties is to learn that most important of sports lessons: if you want to make the team, do what you're told and don't question authority.

I'd rank C3PO's as a bigger scam than Wheaties, except that it only lasted for a year or two, whereas Wheaties has been duping kids for decades. Sometime in the early 80's, George Lucas and Co. decided to bring the world of Star Wars to the breakfast table, because it wasn't enough that kids were playing with Star Wars toys before sleeping in Star Wars sheets while wearing Star Wars Underoo's that were stained with the toothpaste from their Star Wars electric toothbrushes. And yes, I had each of the aforementioned items. My underoo's were the Han Solo kind, in case you're wondering.

Yeah, so anyway, out comes this cereal called C3P0's, and in spite of being named after the lamest character from the original Star Wars trilogy, my friends and I just about poop ourselves with delight. Then we actually ate the cereal, and began to wonder if eating the box might have been tastier.

Thing is, George decided that if he was going to make a cereal, he was going to do the responsible thing and make it healthy. But in the world of breakfast cereal, healthy usually translates into: "soulless cereal that tastes like crap". And it did. We could have had Death Star shaped crunchy cocoa things with X-Wing marshmallows, instead the best thing any kid got out of a box of C3PO's was a cardboard cutout of Mark Hamill's face. 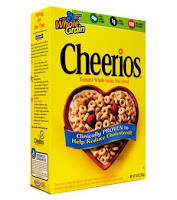 No cereal in the history of time has been any lamer than Cheerios. It is the benchmark of the flavorless junk cereals parents use to torture their kids. I don't care if it is healthy. There's no worse way to start a day--especially for a non-morning person--than to chomp down on a bowl of lifeless little loops that come out of a crappy yellow box. We might as well have been eating Special-K.

Fortunately for all of us, one guy who knew how to deal with Cheerios was Director Richard Donner. In the original cut of 1978's "Superman", there's this extended opening scene on the morning Clark decides to leave his Norman Rockwell childhood to be a stumble-bum in New York. Before she spots him standing dramatically in the field, Clark's earth-momma walks around the house for about ten minutes setting up shop, prominently holding a box of Cherrios the whole time. She's always holding it face towards the camera, too, driving home the point that if you eat Cheerios, your alien super-son will leave you one day, too.

Donner wound up cutting the shots from the final release. Good for him.

Cracklin' Oat Bran looks like dog food. It's also considerably more expensive than most other cereals. Yet almost on taste alone, it is worth the shortcomings. It is even worth a critical time-sensitive nature that prevents you from enjoying the cereal for more than thirty seconds after because it gets too soggy. In spite of the "Oat Bran" moniker, COB has a sweet taste to it that is anything but bland.

Truly a fine cereal...worthy of a bronze medal, anyway.

I don't know who came up with the idea of putting marshmallows in cereal, but that person is a genius. Growing up, I didn't get the sweet cereals too often, most of the time Corn Pops or Trix was about as far as my parents would go. But every now and then, I got to enjoy one of the greatest edible concoctions of modern man: little dark blue crunchy ghosts mixed with pale blue marshmallow ghosts. Count Chocula was too chocolaty, Frankenberry was too pink, but Boo Berry was just right...plus it turned your milk blue. And get this: Wal Mart still sells the stuff all year round.

When considering the breakfast cereal universe, you have the flake cereals (Frosted Flakes, Wheaties), the crunchy orb cereals (Captain Crunch, Cheerios), and then you have Grape Nuts.

Without milk or sugar, eating Grape Nuts is like chewing on gravel...mixed with little bits of tinfoil. But with milk and sugar, eating Grape Nuts is a compelling experience that vaults to the top of the breakfast cereal heap on peculiarity alone. The stuff has this bizarre expansion quality where it triples in size after you get it wet. It seems to be designed for killing pigeons. And judging by how filling the stuff is, it packs about four times the punch of a normal cereal per square centimeter.

The strangest quality of Grape Nuts is that once the leftover bits dry on your bowl, you pretty much need an ice pick to get them off. I'm guessing the only thing that will survive a nuclear holocaust will be cockroaches and little bits of Grape Nuts.

There are tons of other cereals with better flavors, and almost all of them have better box designs, but Grape Nuts stands alone because it knows exactly what it is, and makes no effort to bother with any of its competition. I'm not exactly sure what that is that it is, but I know that whatever it is, it is good, and it is worthy of the breakfast cereal gold medal.