It's been six and a half years since a small group of my like-minded friends gathered in an unfinished basement in Woods Cross for the first official Zombie Fest. As much fun as the yearly tradition has been, over the years I've started to wonder how long it would be before our zombie passion would burn out. Every once in a while a fresh face like "Evil Dead II" would breathe some life into our routine of old standards like "28 Days Later" or "Night of the Living Dead," but in spite of our efforts, the Zombie Fest Apocalypse may still be at hand.

2012's event felt like the last bullet to the undead-brain: after the first feature, a screening of the so-so "Quarantine," most of the fest attendees decided to call it a night. Only my friend and fellow head-shaver Spencer and I stuck around to watch "Dead Snow," a Norwegian film about a group of skiers who encounter a raging band of Nazi Zombies on the frozen tundra.

"Dead Snow" was either the greatest camp zombie movie I have ever seen, or a desperate effort to squeeze original blood from the zombie stone. It had all the craziness and creativeness that make zombie movies fun (plus a POV shot that might cure you of zombie flicks on its own), but while watching it, I couldn't help but think to myself, "where do we go from here?" 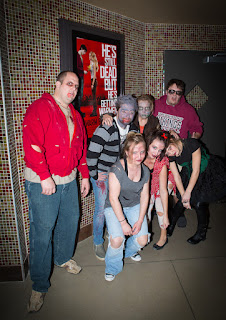 Now I know: zombie romantic comedies. This weekend I took a spin over to the Centerville Megaplex with some friends to see "Warm Bodies," which boasts one of the most unique zombie breakthroughs since Danny Boyle asked, "what if zombies could run fast?" For the first time, we see the film from the zombie's point of view.

Specifically, we see it through "R's" point of view. Played by Nicholas Hoult (the kid from "About a Boy," if you can believe it), R spends his days wandering around an abandoned airport, scavenging for brains and having periodic grunt conversations with his only friend (played by Rob Corddry). It's been about eight years since the outbreak, but he can't remember what caused it, being undead and all.

R is a special kind of zombie. He's dead, but there's still a personality flickering around in his own brain, enough to give us some voice-over narration throughout the film. He's more or less staked out an abandoned passenger jet as his new home, filled with odds and ends he's picked up in his slow, lethargic travels. He's even got a working record player and an impressive vinyl collection. Rrr is basically an EMO zombie hipster.

One day, on a search for brains with some of his undead friends, Rrr stumbles onto a band of humans in search of medical supplies, led by Julie (Teresa Palmer) and her PTSD-suffering boyfriend Perry. The angelic vision of Julie brandishing a shotgun while her blond locks flow in slow-motion triggers something in R, so after beating her boyfriend to death and eating his brains, he whisks her off to the safety of his passenger jet, and the romance begins.

Now, I don't mean to discard the whole "beating and brain eating" thing too casually. One of the more interesting aspects of "Warm Bodies" is how it tries to negotiate its lighthearted zombie-in-love premise with its more macabre realities. "Shaun of the Dead" was able to keep its entire satiric narrative on an even tone, but "Warm Bodies" tries to offer a philosophical metaphor to the idea of eating a person's brains. I guess you have to do that when you're trying to make a sympathetic protagonist out of a corpse that sustains himself on the living, but it's a stretch, if nothing else.

Still, when you get right down to it, "Warm Bodies" is more a metaphor for the awkwardness of love than it is a zombie movie, and that's what makes it so relatable, and so fun. I doubt there is a guy out there who hasn't felt like a staggering, creepy, tongue-tied oaf when trying to have a conversation with a girl he was attracted to. And I'm guessing the film is pretty relatable from the female side of the equation as well. Though I can't say for sure, being undead and all.

The film has its faults, but if you have felt a little burned out by the zombie genre and were debating whether to say goodbye (or if you just need something to tide you over until "Walking Dead" starts up again), this one would be worth checking out before you go.
Posted by The Professor at 12:57 PM