It was the spring of 1995, and I was sitting on the grass in front of the Student Union at the University of Utah talking to my friend Mike. I can't remember if he was talking or if I was talking, but either way, our conversation paused when a cute girl wandered by on the sidewalk. After a second, we regrouped and smiled as we realized we'd both been distracted by the same girl. It was a great moment, and the reason I remember it so well is because Mike was my writing professor at the time.

Spring Quarter 1995 still stands as one of my favorite academic experiences ever. I was in my first year of college, basically killing time before leaving on my LDS mission, and my lack of academic motivation was threatening to disqualify me from my scholarship before I could even get a dozen classes on my transcript. Winter Quarter had been miserable, so when it came time to register for spring, I decided I was going to have some fun. I signed up for an acting class, a basic sociology class, a weight lifting class, and a creative writing class. Plus I think I took "Preparing for Celestial Marriage" over at the Institute.

The first day of class, I was in a stale second floor classroom in Orson Spencer Hall when this shaggy-haired kid came walking in and sat down at the front of the room. He was wearing a multi-colored tie-dyed T-shirt, bermuda shorts, and flip flops. His long, unkept hair dropped down to about his shoulders, and even though it was thinning a little on top, it was clear he was in his mid-to-late twenties.

This was Mike, my creative writing professor.

This was also way back before I knew anything about what qualifies a person to teach a college course, or that graduate students would often teach introductory courses as part of their programs. All I knew was that Mike was a very cool guy who told us right off the top that we could never find him in his office.

"I think my chair is still sitting on top of my desk," he mused. "If you want to get together and talk writing, let me know and we'll go talk outside or something." 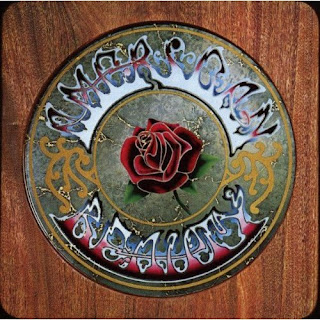 Mike was a grad student in the university's creative writing program and a seven-year Deadhead. This was music to my ears, as I was around the peak of my pre-mission pseudo-hippie period*, but this little factoid became even more significant in retrospect, since the Grateful Dead actually made a weekend stop in Salt Lake that season on their final tour before Jerry Garcia died later that summer. It was almost like the Dead had swung through town and given me Mike as a parting gift before driving off into the sunset in one of those cool VW hippie buses.

I say "gift" because if you can't tell already, Mike was one of my favorite teachers. Aside from the obvious out-of-the-ordinariness, his daily writing exercises spurred a creative flurry in me I hadn't experienced from any other instructor. One day he told us to freewrite about a smell, and I turned the stench of burned rubber into a short story about a car chase between two street gangs fighting over a vat of Tang. Another day Mike told us to write about anything we wanted as long as every other sentence had the word "sprinkler" in it, so I conjured the dramatic tale of a middle-aged suburbanite who went out to his yard one morning only to have his sprinkler system come to life and try to kill him. For all I knew, it was total crap, but I felt like I had made a connection with Mike.

That connection was solidified a couple of weeks later when the same girl stopped both of us in our verbal tracks out on campus. Mike was less of an authority figure than he was a mentor and a kindred spirit, and maybe even a friend. I've built my teaching style from a variety of the teachers I've encountered over the years, but without that experience with Mike, I doubt I ever would have played in a band with Brett, who was one of my first English 1010 students, or gone to see Allen Stone perform in Seattle with Scott, who was in the last English 2010 class I taught before leaving Logan. Whenever I think of a long-term friendship that started in one of my English classes, I see roots that trace back to the spring of '95.

When I got back from my mission, I looked Mike up in the campus directory. It's been so long I can't remember if I called him or emailed him, but I remembered him saying/writing this:

"Yeah, you were one of the few bright spots that quarter."

That was probably one of the coolest compliments anyone has ever given me.

I think he was still in the grad program at that point, but we lost touch again, and I haven't contacted him in several years. Every once in a while I'll punch his name into the Facebook search bar, but my lack of results gives me the feeling his opinion of social media is roughly the same as his opinion of offices.

Maybe I'll just have to find a grassy stretch on campus some time and take a walk, see if I run into him.

*Meaning I wore tie-dyed shirts and had multiple Jimi Hendrix posters, but the closest I came to experimenting with drugs was buying Pink Floyd's first album and actually listening to the whole thing.
Posted by The Professor at 10:10 AM