"Now this is most important, Rat. When it comes down to making out, whenever possible, put on side one of Led Zeppelin IV..."

Every time I hear a song off Led Zeppelin's fourth album, I am transported to my junior year of high school, the year I started dating, driving, and depending on your definition of employment, working. That winter was one of the heaviest in recent Utah history, and many of my junior year memories are connected to me trying to navigate my parents' 1983 Honda Accord across the frozen tundra of the Viewmont High School parking lot, all while my uncle's copy of Led Zeppelin IV rambled out of my tape deck.

As I've swapped stories with friends over the years, I've come to believe that becoming a Zeppelin fan is a teenage rite of passage for every red-blooded American male. For whatever reason, Led Zeppelin is the ideal band for the impotent adolescent rage of the teen years. When I first heard the opening growl of "Whole Lotta Love" while crouched on the orange shag carpet of my parents' music room, I had finally found the music to match the image my cousin's KISS album covers had conjured years earlier. KISS's music turned out to be as dark and dangerous as a vigorous game of whiffle-ball, but Zeppelin burned and strutted. I wouldn't exactly call it rebellious--after all, I found "Whole Lotta Love" on one of my mom's compilation albums--but soon after my basement epiphany I borrowed my uncle's cassette tape, and before long picked up the four-disc CD set with the crop formations on the cover. My initiation was complete.

Recently I decided to test out my "rite of passage" theory by posting a simple inquiry to all my male Facebook friends: are you a Zeppelin fan, and if so, when did you join the club? In no time I had eight passionate endorsements for a band that had rocked into their lives sometime during adolescence, and stayed for good. Here are my favorites: 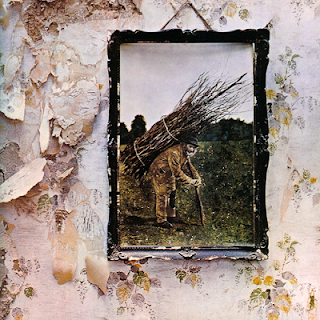 "My dad used to have me listen to Led Zeppelin as long as I can remember. Alongside ZZ Top, it was the soundtrack of my in-car-childhood."

"Rooting around through some of brother's stuff in the attic over our garage (I know. I shouldn't have been going through his stuff.) I found a tape with funny symbols on the front followed by a number 4. I put it in the Walkman that I also found in the attic and turned it up. 'If it keeps on raining, levee's going to break' was the first thing I heard. I was an instant convert..."

And of course this one just warmed my heart:

"Although I liked Zeppelin before I think they reached the status of one of my favorite bands in high school hanging out with none other than Josh Terry..."

Eight responses off a status post is far from scientific evidence, especially when you consider that my Facebook friends number in the hundreds. But after considering the mysterious algorithm Facebook uses to determine who actually sees my posts, and wondering which of my friends have unsubscribed from my posts after getting sick of me pimping my photography business, I still thought my theory had some weight. So I decided to survey a more captive audience: my English 2010 students.

18 of the 31 guys who participated said they were Zeppelin fans, and most of them were very emphatic about it. Many shared anecdotes about how their fathers or a friend got them into the group, and one elaborated on a pack of "weird lookin'" cigarettes he discovered hidden behind a Zeppelin album that led to an experience I probably shouldn't repeat here. Many who didn't identify as fans at least demonstrated an awareness of the band's music, only a couple specifically said they didn't like it, and a couple of my foreign students had never heard of the band before. Then there was my student who responded that "I wouldn't call myself a fan but a supporter."

Maybe he was just worried about his grade.

Overall, my theory seems to have traction, but not enough to call it doctrine. Zeppelin has surely been a rite of passage for many American males, just not every male. But in the process of exploring one theory, I have formed another that seems to hold a lot more potential:

A few days after my Facebook post, I decided to poll my female friends on their Zeppelin fandom, and I got exactly one response. This felt significant, given that my guy-to-girl Facebook friend ratio is about five to four. When I surveyed my 2010 students, only two of my nine female students identified themselves as Zeppelin fans, and neither was very emphatic about it. So I can't say with any certainty that all guys get into Zeppelin in high school, but I do think I can say that most girls don't care much for Jimmy Page and the boys.

Realize here that the emphasis is on the word "most." Obviously Zeppelin has plenty of female fans; I'm talking percentages here. And any fool knows that Led Zeppelin was more than happy to take advantage of their rock-god statuses. A quick glance at any live concert photo reveals costumes clearly designed to create sex appeal, even if it's a creepy skinny-hairy-guys-in-tight-jumpsuits kind of sex appeal. Rock stars are rock stars, warts and STDs and all. I also realize that there is a whole host of other mitigating factors that could be impacting my research, such as the fact that as a Mormon male in Utah, chances are my female friends are considerably less likely to embrace blues rock and considerably more likely to embrace Tim McGraw and songs about skydiving. Ever since that horrible moment years ago when Z-93 dropped its classic rock format and became KBUL-93, I have known that when it comes to music taste, I am a Utah minority.

But I do think that in general, Led Zeppelin's music doesn't crossing the gender gap, and if you asked me why, the first thing I'd do is cite the band's lyrics. My sister has a simple theory about lyrics: girls listen to them, guys don't. And if you listen to Led Zeppelin's lyrics, you notice a couple of things:
Now to me, that doesn't sound like a recipe for female fans. At least on a massive cultural scale. The simple answer is that Led Zeppelin's music doesn't appeal to female fans because unlike Bon Jovi's, it wasn't designed to. And maybe that's why the quote that leads this article is so funny.**

So what does this all mean? Besides the fact that I was willing to survey my English students and tabulate the gender ratio of my Facebook friends for the sake of a blog post on Led Zeppelin? It could just mean that I need to get a life, or should at least stop over-thinking things like when people get into particular 70s classic rock bands. Or maybe there really is something to be said about how popular culture influences our identity, and this is only making a tiny, tiny scratch on the surface of a much larger beast.

But mostly I think I just enjoy the idea of flagging a shared experience. As much as I hated dealing with all the snow in the parking lot and all the uncertain awkwardness of my high school experience, when I think back on those days rolling around in my old Honda, listening to "When the Levee Breaks" and "Black Dog" and "Rock and Roll," I smile. They really were good times. And I think I'm not alone in saying that.

What is the point of a blog if it isn't to bring together people with similar experiences?

*It just dawned on me that my male students outnumber my female students three to one this semester. Interesting.

**Though to be fair, I have never actually tried this. Maybe it works like a charm?
Posted by The Professor at 12:07 PM