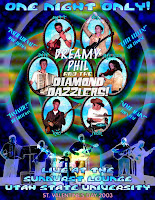 The highlight of my grad school experience was playing drums in a Neil Diamond cover band for the USU Valentine's Dance. We were a rag-tag bunch of hired guns who were willing to set aside our more purist musical aspirations for an evening of schmaltz, debauchery, and tight pants. I'm not sure everyone in the band got the joke-in the 2am Beto's aftermath many of them swore they'd never play a Diamond song again-but to me the experience was transcendent.

I felt the same way a few minutes after 8pm Friday night when a brilliant light burst from the back of the ESA* stage, illuminating a solitary figure through billows of dramatic smoke. As Neil strutted down the ramp, brandishing a black acoustic guitar and churning out the chords to "Holly Holy", the crowd exploded, and a satisfied smile crossed my face. My own personal Hebrew Yule had arrived.

It was clear from the outset that when it comes to showmanship, Neil Diamond is an A-List veteran. From the old-school PA announcer who introduced the show James Brown-Style to the little motorized platform that floated from one end of the stage to the other while he played, Neil worked the crowd like a Soft-Rock Master. Even the platforms for the other musicians in his 15-piece band were motorized, shifting back and forth into different arrangements as the concert flowed from one song to another. When Diamond sang his signature duet, "You Don't Send Me Flowers", he sat at a little table on one end of the stage and gazed mournfully at a bottle of wine.

That's when I began to wonder if even Neil was in on his own joke. To me, Neil Diamond fits in the same category as Tom Jones and Barry Manilow. They all make great music, but you can't entirely take it seriously. But I think Neil does. And I think that's the only way he can get away with it. As he strutted around the stage, flashing poses and crooning for the audience, I got the distinct impression that he believed every ounce of the spectacle he was creating. When I see William Shatner do a deadpan rendition of "Rocket Man" on YouTube, I can't tell if he's making fun of himself or if he's completely serious. On Friday night, Neil Diamond struck me the same way.

Either way, the concert was a blast. Diamond hit all the big songs, from "Shiloh" to "Sweet Caroline" to "Forever in Blue Jeans", sing/talking his way through them all. Cracklin' Rosie was still getting on board, and that stupid chair still can't hear him at all when he sings "I Am...I Said". And of course, they're all still coming to "America". The Traveling Salvation Show was in full force, and Neil's love was still on the rocks.

During the encore, I looked down from my modest upper bowl seat and noticed something that made me smile: someone was actually waving a cigarette lighter. Sometime in the last five years, the cigarette lighter tradition has been almost entirely replaced by the LCD cell phone tradition. Unlike most of today's concert, the first twenty rows of Neil's gigs aren't filled with 20-somethings holding up their camera phones recording the act. The Diamond event was filled with plenty of youngsters, but not near as many as the number of middle-aged and straight up elderly patrons. One silver-haired woman of 70 in front of me spent an entire song sitting quietly with a single fist raised to the air Black-Power style. Neil Diamond himself is in his mid-60's.

Still, when he stood at the top of that ramp Friday night, he looked like he was 20 years old. And he treated his audience like they were, too. So maybe it doesn't really matter whether he's taking his act too seriously or not; he's just giving the fans what they want. They just want their crooner in blue jeans, and last weekend in Salt Lake City, Christmas came early.

*Energy Solutions Arena, or "The Place Where the Jazz Play that's Sponsored By the Company that Cleans Up Our Nuclear Waste".
Posted by The Professor at 4:13 PM