I don’t know where this review fits. This film is already on DVD, so it’s not a new release. But in spite of a soundtrack that features 80’s butt rock kings Europe so prominently, I can’t call it a retro review, either. All I know is I have to write about this movie.

“Hot Rod” is simultaneously one of the worst and funniest movies I’ve ever seen. It is compelling for the incalculable co-existence of its sheer idiocy and brilliant zaniness. I bought this movie. 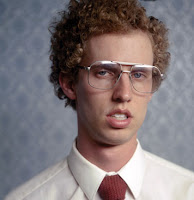 “Hot Rod” is a less-sophisticated knock-off of “Napoleon Dynamite”, if you can wrap your head around that one. Somehow the main characters in the world of “Hot Rod” are even more stupid and disconnected from reality than Jared Hess’s beloved Prestonites, yet like Napoleon and his ilk, there are enough moments of comic gold that you wind up loving the whole thing. At least I do, and I usually have much better taste in movies than other people.

The story? OK, “Hot Rod” is about a loser Napoleon Dynamite look-a-like that longs for a career as a stuntman so he can both pay tribute to his deceased father and win the respect of the stepfather that recognizes him for the nitwit that he is. Specifically, “Rod” wants to jump fifteen school buses with his moped so he can raise enough money to pay for the heart transplant that will get his step dad into good enough health to allow Rod to beat him back into a pulp, thus winning the desired respect.

On the one hand, this film is such an atrocious rip-off of “Napoleon Dynamite” that a member of Rod’s stunt team is named “Rico”. On the other, this film contains perhaps the greatest homage to “Footloose” ever to grace the silver screen. 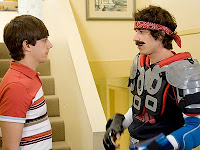 On one hand, this film is completely unpredictable, veering off onto bizarre tangents like the scene where Rod and his stepbrother fill sixty seconds of screen time with the phrase “Cool Beans”. On the other hand, this tangent was probably inserted into the film mostly to extend the already short screen time.

On yet another hand, Andy Samburg plays Rod with a delicacy that can only be described as “not delicate”. At the same time, his character ultimately decides to eschew the typical sappy ending most comedies stumble their way into, and instead gives the audience a conclusion that is more satisfying, realistic, and funny. And this ending involves crapping one’s pants.

Worst of all, the leading lady in “Hot Rod” is an actress named Isla Fisher, the token “beautiful girl-next-door who would never in a million years have any interest in Rod whatsoever yet seems incalculably drawn to him and only has to break up with Gob from ‘Arrested Development’ and his red Corvette in order to make it happen.” Fisher also happens to have an adorable Scottish accent in real life. She also happens to be married to this man: 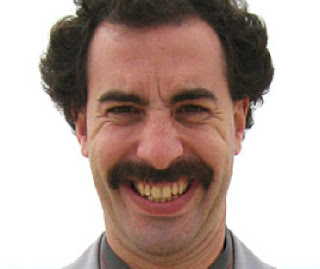 I don’t know what else to even say.