Layton, UT – Avid Harry Potter fans and local moviegoers have been duped. All along the Wasatch Front, reports are pouring in of impostor Harry Potter films showing up in local movie houses. 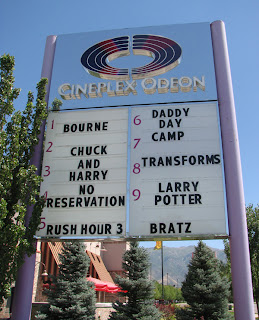 The substitute film, dubbed “Larry Potter”, has been fooling locals into buying tickets, thinking they were going to see the newest Potter franchise release, “Harry Potter and the Order of the Phoenix.” But instead of Harry’s fifth year at Hogwarts, complains Hyman Roth of Kaysville, “I get three hours of home improvement videos with some fat guy in a plaid shirt.”

Apparently “Larry Potter” is a collection of how-to home repair videos spliced from old episodes of “This Old House” with Bob Vila, patched together with music video footage of kids skateboarding in front of Davis High School. The entire package comes in at close to 180 minutes, and according to Cineplex Odeon manager Luca Brasi, “has been raking in the dough.”

“I was a little suspicious at first,” explains Luca, “this late in the season I would have thought Harry 5 would be over at Sugarhouse, bringing in six bits a head. But then I just figured they were re-releasing it with some new CGI or something to squeeze a few more bucks out of these kids.”

Reaction up and down the Wasatch Front has ranged from confusion to outrage. "I'd missed the last couple movies," said North Salt Lake resident Peter Clemenza, "so I didn't catch on right away. I just figured Daniel Radcliffe had put on some weight and gotten really excited about drywall."

“I remember all these kids coming out of the theater crying,” said Philip Tattaglia, veteran ticket taker at the Gateway 8 in Bountiful. “At first I felt really sorry for them, but then one of the little (expletive deleted)’s stabbed me with his plastic wand.”

The scam has impacted everyone involved, and placed a particular burden on parents.

“Robbie’s friends make fun of him at school,” said Theresa Hagen of Alpine, as her son stood dutifully at her side outside University Mall Saturday. “They’ve all seen Harry twenty-seven times, and poor Robbie’s still stuck on twenty-four.”

Local authorities are hard at work trying to locate the source of the confusion. But so far leads have failed to provide significant evidence.

“We found the same return address on all the film cases,” explained Officer Al Neri of Draper, “but it turns out that 1060 West Addison in Chicago is the address for Wrigley Field, so now all we’ve got to go on is the skateboarding footage.”

The footage may turn up some progress, however. “One of the boys at the station recognized one of the skateboard clips from YouTube,” said Officer Neri, “and we were able to trace it to a user that goes by ‘halfpipemama88’. We’re pretty much stuck from there, though. We do know that she lists ‘Indian Thriller’ on her favorites list. Maybe that means something?”

In the meantime, local theaters have been sheepishly removing “Larry Potter” from their marquees, and trying to find ways to make up the damages to all the disappointed youngsters.

“We were thinking about dressing up one of the projector operators as Voldemort and sticking him in a dunking booth,” mused Century 16 manager Carlo Rizzi, “but we wound up giving the kids a bunch of free passes to see ‘Die Hard’ instead.”

(The above article is intended as satire. All quotes and references are fictional.)