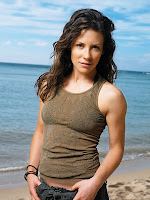 Been having some strange dreams lately. One featured a trip to a remote blues bar with my dad that will get its own entry in time. Another one this morning saw me spending some quality time with Kate from “Lost” out on their deserted island. I think I was consoling her as she was torn between her feelings for Jack and Sawyer.

Either of these are a fresh change of pace to my usual occurring dreams, where either all my teeth fall out or I’m driving cars with no brakes. Interpret as you will.

But the dream I want to address here is one I had earlier this week. I don’t remember many details, and I barely remember the context, but the experience left me quite rattled. See, all I recall is having an awkward conversation with a man in some sort of public place. It could have been a bus, a train station, or a Chucky Cheese, for all I know. I really just don’t remember.

What I do know is that I felt very disappointed in the conversation, almost as if I harbored a sense of foreboding about the entire thing, though (in the dream) I couldn’t identify why.

Then the man opened his jacket and revealed a half-dozen rows of explosives, and I had my answer.

Best as I can tell, the man I was speaking to in my dream was a suicide bomber. (Or “homicide bomber”, depending on the political stance you want to take). Once I saw those explosives, I knew in no uncertain terms that I was about to die. A somber feeling that combined disappointment and understanding swept through me, and then the dream was over.

There was no dramatic jerk awake, no horrified cold sweat. The “moment of truth” neither came nor even got close enough to scare me. It was just that feeling, that sense of “well, this is it”, that I was left with.

In one fell swoop, I felt as if I’d finally gotten an answer for every issue that felt unresolved in my life. No concrete “career”. No marriage. No real fame and fortune. Plenty of blessings and great memories, sure, but at that moment I knew why I’d never found my way down certain paths.

I wasn’t meant to. I was meant to get blown to Hell by some whack-job.

Obviously this dream has some connection to my abstract view of death—to this day, I have never attended a funeral—but I think it may have been specifically brought on by the twenty minutes of “Saving Private Ryan” I caught Saturday night before going to the Epic Summer Film Festival (which was, by contrast, quite a lively event). I was fortunate enough to catch the infamous Omaha Beach sequence, where Allied troops are being blown to bits left and right while Tom Hanks tries to get his men through the battle lines. Even edited for cable, it is a difficult thing to watch. What strikes me about the whole thing—other than the creative ways Spielberg blows everyone up—is the nihilistic way everyone gets killed. Here are hundreds if not thousands of promising young men, leveled scores at a time without a second thought. One second they’re America’s best and brightest, with hopeful families at home and the American Dream on their shoulder, then the next second they’re in pieces on some French beach.

This isn’t meant to be a commentary on the morality of war, far from it. In fact, if there was one complaint I had with Spielberg’s film, it’s that you never got a real sense of what the men were fighting and dying for: namely, to stop a horrible, horrible menace from continuing and spreading one of the worst atrocities the world has ever seen. No one on that beach died for nothing.

What bothers me, though, is that all my life I have felt this sense that I was meant to become something “great”, that I had some pronounced role to play in mortality. Usually I’ve been shortsighted enough to assume that meant I was going to play pro basketball or be a movie star. I certainly haven’t given sufficient credence to the idea that anyone who lives the life of a worthy husband and father is a real hero.

Over time, my more material aspirations have eroded. I used to draw up floor plans of the mansion I would build one day, but that stopped when I spent six months in a one-bedroom apartment in Kankakee, Illinois with a twelve-inch mold spot on the ceiling over my bed. I still thrill at the energy created at Jazz games and Star Wars movies, but the stories I hear of “the life” make me hesitate to inject myself into that world full-time. Still, I feel driven—if not obligated—to do something notable with my talents. Something that stands out.

It’s been very difficult to reconcile these notions, especially when I am reminded that at any given moment, I could be called out of the game and sent home.

Last spring I watched the Jazz battle the Houston Rockets in the first round of the NBA playoffs. As I watched a number of calls go in the direction of Houston’s 7’6” center Yao Ming, I found myself thinking a familiar thought: “yeah, if I was seven feet tall, I could do that, too. Probably a lot better. Everything you have was given to you.”

But for the first time, a different thought followed: “Josh, you’ve been given some talents, too. Who’s looking at you and saying the same thing?”
Posted by The Professor at 9:13 PM