I can take care of living things

This morning I went to water my bamboo plant and realized that I have passed an important milestone. The problem is that I don’t know what that milestone is. See, I have had this same bamboo plant for several years now, and in spite of my pronounced lack of nurturing skills, it is still alive. I do not know how this reflects on my future capacity as a father. 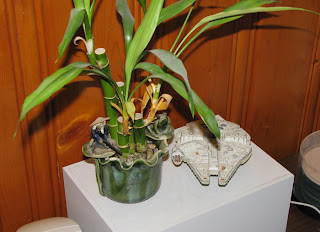 Actually, to be more precise, the bamboo plant is 80% alive. When I first got it (a Christmas gift, perhaps?) it had five healthy bamboo stalks, firmly planted in a bed of small stones. In the time since, one of the stalks expired, probably because for a period of four months I failed to give my plant its necessary once-a-month watering.

So in terms of being a father, I guess this would be the equivalent of losing my child’s left leg to gangrene.

Thus, my track record with “responsibility for living things” has not been exemplary. Just ask the frog and fish I sustained for a year. I inherited them from my sister, who had tired of them. (This would reflect poorly on her potential mothering skills were it not for the fact that she has had near sole responsibility for a cockatiel—first dubbed “Baby Bundles”, then “Bundles”, now “Satan”—for upwards of seventeen years.) 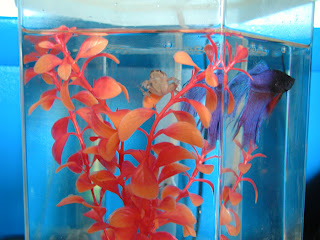 I faithfully attended the needs of my frog and fish—dubbed “Confucius” and “River Man”, not respectively—for several months without incident. Then shortly after returning from a pilgrimage to Chicago I found River Man hovering stiffly near the bottom of his tank. About two weeks later Confucius took up permanent residence on the water’s surface. (Mental note: dead fish have more natural buoyancy than dead frogs).

I was struck that the two passed so closely to each other, in spite of the fact that to my knowledge, I had been faithful in feeding them. True, Confucius died almost immediately after I changed the water in his tank one afternoon, but I still suspect that he passed voluntarily out of respect for his departed friend. This is, after all, the same way my paternal grandparents want to go, which they remind me of on a weekly basis.

(My deep suspicion is that the deaths of Confucius and River Man were a protest of my neglectful treatment of their dream interpretation column, which I sincerely regret.)

So for now, the best I can do is celebrate however many months or years I have kept my little bamboo plant alive, taking comfort in this achievement while trying to avoid getting too psyched out by the real adult responsibilities of child-rearing so many of my friends are now managing. And on that note, I leave you with a shot I took of one of my auxiliary nephews, Simon Ostler, as he destroyed a generous serving of his first birthday cake.

I may not know anything about raising kids, but I know a funny picture when I see it. 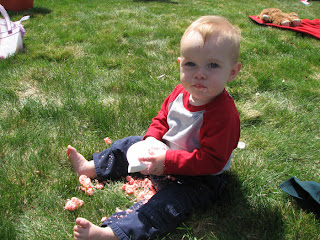