Met the new bosses...same as the old bosses

Right before ripping into Monday night’s “Pinball Wizard” encore, Who guitarist and longtime leader Pete Townshend paused on stage and swayed back and forth, his red Fender Stratocaster hanging at his waist, aimed at the audience like a rifle. With a weary smile on his face, he seemed to be saying, “are you sure you want to drag this old man back on stage again?” 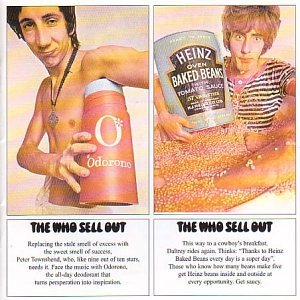 Pete seems a lot happier these days. For one thing, he only dropped a pair of F-bombs in between songs. Down in six years ago, “Mr. Windmill” went on a number of tears, only some of which were musical. But on Monday night, I caught more than a few genuine smiles from one of Rock’s legendary “angry young men”.

Seeing Townshend and Daltrey in action again was a bittersweet experience. They sounded great, but even though the backup musicians were fantastic—especially drummer Zak Starkey (Ringo’s kid)—there was a feeling of emptiness on the stage. The new bass player managed to hold Entwhistle’s stoic posture, and his bass licks were fine, but having him stand in the back with the other “backups” made it all the more obvious that these days The Who is one Ox short. Starkey does a better job of filling the void left by original Master of Mayhem Keith Moon, partially because Zak is a great drummer, mostly because the fact that his dad was Moon’s best buddy gives his presence an almost nostalgic appropriateness.

Of course, no one is aware of the absence of his old friends more than Townshend, who has always struck me as the 60’s icon most aware of his peer’s mortality rate. I’ll never forget his point that while Hendrix and Moon were our icons, they were his (expletive deleted) friends. I doubt there’s a time he takes the stage that he doesn’t (expletive deleted) think about them.

What has remained is the music, and on Monday the crew pulled out all the stops. From the opening licks of “I Can’t Explain” through the epic encore medley from “Tommy”, Pete and the boys nailed all the high points, and convinced me that “Baba O’Reilly” is indeed my all-time favorite Who track, even if I still don’t know what the title means. “Won’t Get Fooled Again”, “My Generation”, and “Who Are You” are as anthemic as ever, and even the stuff off the new album sounded very Who-ish.

Thanks to the generous help of my inside man Micah, I was able to score tickets right across from the stage about ten rows up. We were close enough to believe that Pete could actually see us when he waved goodbye at the end of the show. I shared the event with my old friend Josh Christensen, fellow Who enthusiast, and in fact, the same guy I saw the concert with.

This time around, The Who brought The Pretenders as the opening act. The Pretenders also managed to make the most of the sound system, grooving through favorites like “Back on the Chain Gang” and “Don’t Get Me Wrong”, and I couldn’t help but smile when I realized that the woman singing on stage once had a child with Kinks frontman Ray Davies.

What a weird life.

That’s what’s so strange about going to concerts like these. Something tells me that I’d probably never be real tight friends with most of these guys, aside from sharing common artistic drives. As I look around the arena at the aging hippies, the beer-toting socialites, and the guy in full leather and pompadour wearing the “BEFORE ELVIS, THERE WAS NOTHING” T-shirt, I realize I’m not your typical Who fan.

Yet, the music they make still hits—sorry—a power chord with me every time. “Who Are You” might have been written after a drunk Townshend ran into the Sex Pistols at a bar in ’78, but it means something else to me. “Teenage Wasteland” might remind some people of lighting doobies in their parent’s basement, but it applies equally to 1993 behind my blue-green eyes. Most music is vague enough to serve those multiple functions.

It served them Monday night, even if the band was only at half-staff.

Posted by The Professor at 8:47 AM