Is it real? Or is it Bowie-Time?

“The Prestige”
Three stars out of four.

Worst thing about “The Prestige”: not casting members of the band Tesla as his assistants. 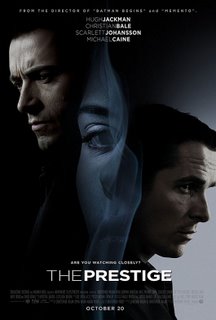 “The Prestige” is centered on the rivalry between two late-nineteenth century magicians, played by Hugh “Wolverine” Jackman and Christian “Batman 2005” Bale. Anything beyond that summary has to be considered a spoiler, so read on at your own risk.

Director Christopher “Batman Begins” Nolan has taken a page from “21 Grams” and even “Slaughterhouse-Five” in constructing his first major film since returning the Batman franchise to the big screen. “The Prestige” unfolds out of sequence; there are so many flashbacks it’s hard to say there is any kind of chronological storyline. It’s a movie to be felt and examined rather than observed.

The plot follows the back-and-forth rivalry and vindictive/vengeful actions of the two magicians as they vie for performer supremacy.The film “opens” during a tragic “accident” at Wolverine’s big performance, where he “dies” and Batman gets fingered for the job. For the next two hours, you learn about the circumstances surrounding the murder/accident itself, the history behind it, and the similarly enigmatic circumstances that emerge after it.

That’s why it’s so hard to write about this movie: it’s so built on the idea of illusion and plot twists that it’s hard to put down a concrete explanation of what is actually happening.

Introducing the supporting characters is equally problematic. You’ve got Scarlett Johanssen playing the mistress/sidekick/co-conspirator/lover/double-agent/whatever, then you’ve got Michael Caine, who plays a mentor/co-conspirator/magician/insert random role here while working either for or against Batman and Wolverine simultaneously. Then you’ve got some wives and kids and side characters, and of course Mr. Space Oddity himself as the exiled inventor living in . (Why ? Was Tesla a closet Broncos fan?)

It sounds confusing, but it’s actually a lot of fun. It’s also satisfying in a distorted kind of way, because in spite of the secretive nature of magicians and their tricks, Nolan manages to explain most of the tricks you see over the course of the film. In that way, the audience is both an observer and a privileged insider.

Regrettably, the only questionable element of the film is the one trick that is never explained, because supposedly it is real. I won’t go so far as to spell it out explicitly, but I will say it involves that guy that used to dress up as an orange-haired space alien androgynous rock hero back in the 70’s. Plus I think Michael Keaton already made a movie about the subject back in the 90’s.

More favorite tidbits from the movie:

*According to the film (which must be accurate if it came from Hollywood, right?), Thomas Edison employed a stable of spies that not only scoured the countryside in search of rival inventors and their work, but also burned the rival facilities to the ground in order to quell the competition. Who knows if that’s right, but I can’t get over the idea of the inventor of the light bulb sitting behind a mahogany desk stroking a cat while he tells his goons to “make Nikola Tesla an offer he can’t refuse.”

*My childhood was either blessed or scarred by ’s performance in “Labyrinth” as the bad guy after Jennifer Connelly’s baby brother. It’s good to see him on screen again for the first time since his brilliant cameo in “Zoolander”, especially because he isn’t . Other than the off-colored eyes, Ziggy Stardust does a great job of looking like a regular guy. Well, as regular as an eccentric exiled Serbian inventor can look, I guess. Nolan should have called this movie “Ziggy Tesla and the Magicians from ” and left it at that.

“The Prestige” is rated PG-13 for violence to little birdies, Scarlett Johanssen’s lips and that spooky feeling you get every time you see the kid from “Empire of the Sun” all grown up. Side effects may include dizziness, confusion, headache, and comments like, “hey, how come Tesla’s eyes are different colors?”

Posted by The Professor at 9:42 AM