In this topsy-turvy world of ours, can a button-down IRS agent find love with a hippie baker? According to “Stranger than Fiction” they can. At least if you’ve got Will Ferrell and Maggie Gyllenhaal filling the roles. In a movie that toys liberally with the line between reality and fiction, their relationship might be the strangest feature of all.

“Stranger than Fiction” narrows its focus to a basic idea: somehow the lives of a struggling writer (Emma Thompson) and a boring audit agent become crossed, and the agent winds up a character in the writer’s new novel. To put it in more concrete terms, Will Ferrell starts hearing Emma Thompson’s voice narrating his life. 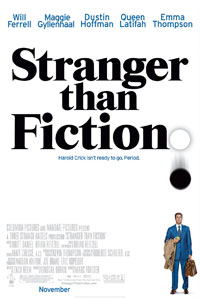 It wouldn’t be such a bad thing—Ferrell’s character clearly needs the company—but Thompson’s narration helps him realize just how mundane and boring his life really is. And how much nicer it would be if he could get involved with the hippie baker he’s auditing.

Over in her own end of the space-time continuum, Emma is fighting a ten-year bout with writer’s block. Seems she can’t quite figure out how to kill off her newest protagonist, and is completely unaware that he exists in reality as well as in her manuscript. To fight the block, her publishing company brings in Queen Latifah as her “special assistant”, because obviously the best way to deal with unproductive clients is to bring in ex-rappers. I personally am waiting for my visit from the Diabolical Biz Markie.

Admittedly, it’s hard for me to give an objective review to a film that is centered around a guy who’s dissatisfied with a redundant life and a neurotic writer. To make things worse, Ferrell seeks out help from, of all things, a literature professor, played by Dustin “I go shoeless because it makes me look laid-back” Hoffman. There’s a point where you relate to a good story, and then there’s a point where a movie hits so close to home that you feel like someone in is channeling you…which is kind of the point of this whole movie.

Another point is to help Will Ferrell continue down the trail blazed by fellow eccentric-comedian-turned-understated-heartwarming-everyman Jim Carrey. Ferrell’s IRS agent, astounding as it may seem, is a lot of fun to watch, and like Carrey, becomes very likable once he turns off the over-the-top stuff. He actually makes you believe that he and Gyllenhaal are made for each other.

Aside from a great soundtrack and Ferrell’s inspired performance, the thing I enjoyed most about “Stranger than Fiction” was that it was innovative, quirky, and experimental without feeling compelled to inject all of the usual R-rated material such “edgy” directors usually use. Now that CleanFlicks has gone the way of the Dodo, “Fiction” is all the more refreshing.

At the same time, “Stranger than Fiction” still earns its PG-13 rating for old dude butt shots, some Ferrell/Gyllenhaal make-outs, the obligatory solo F-bomb, and the mental stress of having to observe the life of an IRS agent up close.