The 10 Most Embarrassing CDs in my Music Collection

Earlier this year I put together a list of my most embarrassing DVDs. As a film critic and self-avowed movie snob, I think this was a good exercise to keep me humble. But my effort to do the same thing for my CD collection has been more complicated, because a) I no longer own a lot of the humiliating CDs I ordered from the BMG music club back in the '90s, an b) thanks to iTunes, I can download all the goofball songs I want for a buck under the guise of ironic appreciation. There's a big difference between downloading "Ice Ice Baby" as a joke for 99 cents and throwing $15 at an entire album's worth of Robert Van Winkle's early '90s mayonnaise raps.

So I am left with a choice: construct the list as a retrospective of inept musical appreciation, or make it a warts-and-all confession of albums I still own and cherish (or just forgot to run down to the Tom-Tom Music exchange back in 1998). After careful consideration, I think it might be more revealing to know what I still own on CD today... 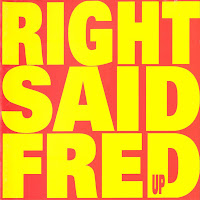 I bought this CD during my first year of grad school in order to use "I'm Too Sexy" for an English 1010 writing activity. iTunes hadn't happened yet, so I had no choice but to pick up the entire album for seven bucks out of the used bin of a local Hastings. On the plus side, this demonstrates the great lengths I will go to serve my students. On the downside, I have listened to "Don't Talk, Just Kiss" more than once.

I don't know if I should even try to excuse this one. Avril Levigne's first album is guitar and drum-driven, which kind of helps--I do think it would be fun to play the drums to "Sk8ter Boi," and I seem to recall that being the primary impetus for the purchase--but beyond that, I think my defense runs out of gas.

No need for a summary here. I've already given this little gem its own post. And yes, the ball is back in my court.

The one CD from that fateful first round of BMG acquisitions that has survived to this day. I traded in Paula Abdul and Janet Jackson, but something told me that Milli Vanilli was worth holding on to. And let's be honest, "Blame it On the Rain" is a pretty great song.

Whenever I think about bands that would have sounded awesome if they weren't dragged down by dated production techniques, Roxette usually springs to mind. I think it was my friend Mark who pointed out that hits like "Dangerous" and "Paint" would work fine today if you stripped away the '80s-ness of the recordings. But even with the kitsch intact, "Look Sharp" has enough high points to stay on my shelf.

If it was available on iTunes, I would have bought the title track for a buck. But Pras didn't want his one hit available for a ninety-nine cent download. So how else was I supposed to get a hold of the song that reminded me of my favorite Aggie-ette? Sometimes sacrifices must be made for the greater good.

I genuinely like Bread. "If" in particular is a fantastic song. I think I just struggle with the idea of owning a CD by a band with such a sissified name. If it were a joke, I'd be OK with it. But Bread is a legit name. You can tell because the music sounds like bread. White bread, specifically. Probably Wonder Bread. And that doesn't help my argument at all.

Originally I had listed my 3-CD Burt Bacharach boxed set here, but as I think about it, it's much more difficult for me to explain my ownership of the "Serendipity" soundtrack, so I decided to man up and make the switch. To be fair, no one should ever have to strain to justify a soundtrack that includes music from Nick Drake and Louis Armstrong. But judging from the reaction to my DVD list, I should probably come clean on my total "Serendipity"-related purchase history.

There's a semi-famous* scene in "Tommy Boy" where David Spade and Chris Farley begrudgingly acknowledge their love of the song "Superstar." And hey, it's a pretty great song (I happen to favor the original artist's version from the "Mad Dogs and Englishmen" soundtrack**). But I would be lying if I didn't admit that there were plenty of other Carpenters' songs I liked.

I'm trying to remember why I picked this up used for five bucks a few years ago. It may have been because I wanted a copy of the Roxette song. I don't think it was for the Christopher Otcasek song (which was also featured in "Crocodile Dundee II," by the way). The funny thing is that I don't think I've ever seen the entire movie.

I can't include this on the main list for two reasons. The first is I can't find it, so I can't confirm that I still own it (trust me, I searched). The second is that I'm not sure it really qualifies for this list since, unlike the other entries, I wouldn't be all that embarrassed if anyone came across it while browsing through my collection***. In fact, I think I would go out of my way to point it out to guests during dinner parties. The fact that I picked it up (for free, as I recall...it may have been a white elephant gift) already knowing how awful it would be probably disqualifies it.

**Also not on YouTube. But worth looking up...trust me.

***This feels like an oblivious thing to say in a voluntary blog post that publishes my musical sins to the entire planet, but somehow taking the initiative feels much more empowering than merely waiting for disaster to strike on its own.
Posted by The Professor at 1:08 PM