The first time someone ever suggested I eat at a Hard Rock Cafe I wanted to punch them. I was packed into a tour bus with sixty of my classmates on a high school science tour of southern California, and we had just completed our 12-hour+ journey from Bountiful, Utah to San Diego. Two girls tried to convince our teacher to let us grab lunch at the Hard Rock, presumably so they could buy one of the souvenir T-shirts that had infested our school hallways since we were in Kindergarten. At that point, any suggestion that didn't include the words "go to our hotel so we can get out of this (expletive) bus and sleep in a normal bed for three hours" would have inspired the same violent reaction.

Yet over the last ten years, eating at the Hard Rock Cafe has actually become one of my two regular traditions for a visit to any of our nation's major cities. (The first is buying the single most obnoxious fridge magnet for that city I can find). But I no longer seek out the Hard Rock Cafe because I want to stare in wonder at an autographed guitar that used to be owned by an obscure guitarist for The Romantics back in 1985.

I go to the Hard Rock Cafe because I like the food.

For a guy who has become a acknowledged snob in several important cultural areas, this seems like a significant confession, like admitting that I had a poster of Paula Abdul on my wall in the eighth grade, or that I own "Pearl Harbor" on DVD. For pop culture museum-restaurants like the Hard Rock Cafe and Planet Hollywood*, actual food quality is an afterthought, and endorsing it feels like Michael Scott's proud tradition of grabbing a "New York Slice" at Sbarro on his corporate trips to Manhattan. But the truth is that I have developed a taste for Hard Rock Cafe chicken fingers, and the spicy-yet-tangy reddish-brown dipping sauce they come with. I order the chicken fingers every single time I go, along with an order of fries, because the chicken fingers are considered an appetizer. At around $20, it's my most shameful meal, just ahead of Taco Tuesdays at Del Taco. 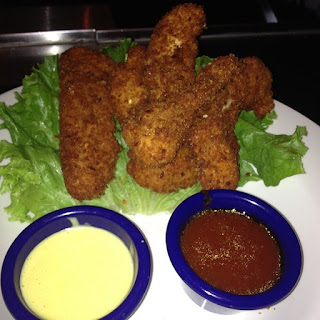 It's possible this tradition would not exist if Salt Lake City hadn't lost its Hard Rock Cafe several years ago. I don't know if it was because of its obscure non-tourist-friendly location in Trolley Square or just that there really aren't a lot of people who want to look at displays of old Osmond brothers stage outfits, but losing Hard Rock became another sad piece of evidence to suggest that Salt Lake City most definitely does not rock.

The hard-rocking Cafe image did always feel like an odd fit in pioneer-settled Salt Lake City. For years I half jokingly kept track of the number of Hard Rock Cafes where I had dined, assuming that as long as the number was equal to or less than the number of LDS temples I had attended, my net righteousness would be safely in the black**. This dynamic was never more vivid than the day my sister and I followed up a visit to the Las Vegas temple with a late lunch at the Hard Rock off the Vegas strip. Up until that point our strangest one-two punch was the time we visited the Pro Football Hall of Fame and Amish Country on the same afternoon during a family trip to Ohio in the summer of 1998.

The Hard Rock has consistently provided some of my strangest travel memories. Aside from the Vegas two-step, there was the time in Niagra Falls where I inadvertently insulted my waitress during a discussion on Canadian currency***. Then there was the time in Chicago where I tried (and failed) to ask out a cute waitress named Paige because I was feeling adventurous and lonely. But the topper has to be the time I was seated by the front window at the Seattle Hard Rock and looked up from my chicken fingers just in time to see the two-dozen buck-nude participants in Seattle's annual Naked Bike Ride pedal down the street. I hadn't seen that many tiny pee-pees in one place since my junior high gym class.

Altogether, I've dined at Hard Rocks everywhere from San Francisco to Times Square, and yet in all these years, I've never dined at the San Diego location. Maybe I'm afraid I'll run into a tour bus full of high school biology students. Maybe finally taking my classmates' advice will confirm the fact that I'm not as sophisticated as I'd like to think I am. But as long as they still have that chicken finger sauce, I'm sure I'll make it there eventually. And I'm hoping that a Paula Abdul video will be playing on a monitor nearby.

*Does Planet Hollywood even exist anymore? Does it matter?

***Seriously, do you base your tip on Canadian currency rates or American? I'm never going to leave the lower 48 again.