I scored every single one of my team's points for an entire game.

Granted, we lost that game 72-4, but I'll take whatever credit I can get. My shining moment came on the first night of the Bountiful North Stake's Deacon's Basketball Tournament, a two day ecclesiastical bonanza that would match up the 12 and 13-year-olds of six wards in a pre-pubescent bloodbath. It was my baptism by fire into the cultural curiosity that is LDS church basketball. Thanks to a massive age gap that left my ward with only two deacon-aged boys, I was recruited along with another half-dozen of my eleven-year-old peers to fill out the roster. Just enough for the 19th ward to field a team of 6th graders against five teams stacked with kids on the opposite end of their junior high growth spurts.

I can't remember who we played in that first game. It might have been the 13th ward, or maybe the 10th. They were all older than I was, so I didn't know any of them anyway. What I did know was that from the opening tip, my team's challenge was not to score points. It was to get the ball across the half-court line. We'd barely inbound the basketball before a merciless full-court press would pressure us into turnover after turnover, easily converted to quick layups by kids who may as well have been 7-feet tall from our perspective.

I don't know that any of us had serious aspirations going into that tournament, but any hopes we had were quickly hammered into the hardwood. It was the first of many games I would play at the A-frame church up on the hill that overlooked the radish and bean fields of Bangerter's farm (where I would earn my first professional wages two summers later). The lighting inside that tiny basketball court was bad even for church gym standards, and the whole place had a distinctive orange tone that was a far cry from the bright Celestial glory of our spacious home court down the road. Not that any of that would have made any difference.

At some point late in the first half, we still hadn't put a single point on the board, so I followed in the time-honored tradition of many NBA professionals and decided that playing defense was pointless. As our opponent picked up another steal and made their way down to another easy basket, I lingered back. Our point guard Phil Johnson took the inbounds pass and spied my 4'9", 75-pound frame all alone and uncovered at the other end of the court. He lofted a cross-court pass that I grabbed just past the opposite foul line, and in a single motion I turned and tossed up a 10-foot jumper before anyone could get back and slap it into the next week. In my mind, it looked just like this play.

When the shot went in, the crowd erupted like we had just won the national title. Shutout averted.

At halftime, my coach pleaded with the other squad to let us at least get the ball past mid court, but there must have been some kind of BCS-ranking applied to the tournament standings, because when the second half started, the carnage continued. I do seem to remember our team getting a few shots off, either because we were playing better or because the other team was getting bored. But we didn't convert another field goal for the rest of the game.

As the clock finally wound down on our sad debacle, somehow we got the ball past mid court, and I took a pass near the top of the key. Again I turned to throw up a prayer, but this time the defender clipped my arm, and I was sent to the foul line.

A few seconds later, the buzzer sounded, the slaughter finally ended, and I walked away from my first church basketball game feeling conflicted. The defeat was excruciating, total and humiliating, yet it offered just enough hope to make me think I could hold my own with real competition. We fared better over the course of our next four games, though I don't remember winning any of them. By the next year, we were all on our way through puberty, and just another group of awkward pre-teens. A few years after that we were offering beat downs of our own, though I don't remember any of them being as lopsided as 72-4.

I never went on to play college ball. Heck, I never even went on to play for my junior high team. Like most wanna-be jocks, my basketball "career" was spent in rec leagues and pick-up games. But I had a pretty good time. And I'd put my highlight reel up against anybody's.

The world may have spent the last thirty years wishing they could try on Michael Jordan's shoes, but just about everybody has taken a stroll in mine. 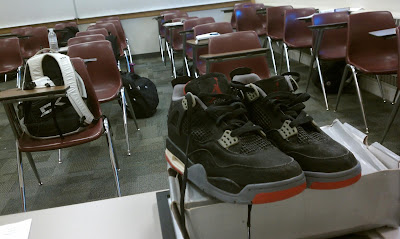 Posted by The Professor at 2:09 PM