The Instant I Became a Photographer

I've had an artistic impulse ever since the moment I started drawing Star Wars characters with my crayons and markers when I was four years old. In fact, this impulse was so defining that if you browse through my junior high school yearbooks, about half the hand-written entries say something like, "you are so good at drawing!" or "you are the best artist!", because most of my peers didn't know what else to write about me.

But my interest in photography didn't come until much later in life. I took a basic photo class at the University of Utah, but my fumblings in the developing room and my mediocrity in the darkroom ensured that any professional aspirations remain safely subdued.

It wasn't until summer of 2006 that my passions hit a significant milestone. I had returned to Chicago for the first time in seven years to show my father around the areas I served as a missionary. For a week we toured the better part of northern Illinois, from Freeport to Kankakee, and spent several days downtown in the Loop, where we enjoyed Giordano's pizza and live blues at the Blue Chicago.

Over the course of that week we also found out that half a dozen of my old friends and contacts from the mission days had died, none more colorful than Dan Giles, a retired 6'2" CTA driver from Chicago's south side who was a spot-on doppleganger for James Earl Jones. News of his and others' passing wove a sad subplot through an otherwise great trip, which was mirrored by a rainstorm downtown one afternoon as my dad and I were staying at the Allegro Hotel in the Theater District.

It wasn't a heavy rainstorm, but it was enough to discourage us from setting out on any major tourist efforts. Still, I was determined to go stretch my legs, so I grabbed my dad's 3.2 megapixel Olympus point-and-shoot and went for a stroll. The storm had calmed, but the rain was still coming in intermittent bursts, so I was able to catch a number of simple shots that were accented perfectly by faint streaks of water.

Here are two of my favorites, where the rain complements the dingy, dreary age of Chicago's L-Train system: 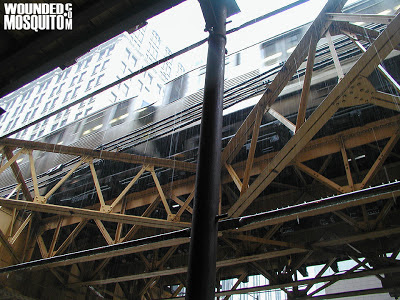 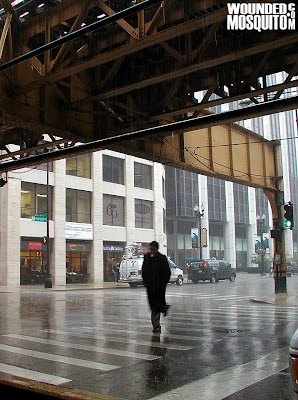 As I came to one street corner, I noticed the Chicago Theater District logo stamped in the concrete. But as I got down at a nice angle and took the picture, an oblivious pedestrian walked through my shot. 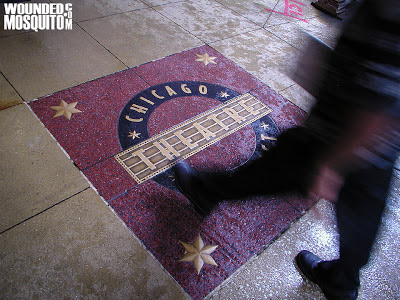 At first I was annoyed, because I wanted a clear picture of the sidewalk. But as I looked at the result, I couldn't help but be impressed. The pedestrian had created a motion blur with his outstretched leg that was perfectly composed to the right of the sidewalk logo. The picture looked far more "artistic" than anything I'd ever shot before. In some ways, you could argue that it was the first time, even if by dumb luck, I had taken a real photograph.

In the months that followed, I eventually picked up a point-and-shoot camera of my own, and continued to take shots that had a lot more to do with documenting my surroundings than they had to do with creating art. I wouldn't pick up my first SLR for a couple of years, and it wasn't until many months after that that I finally learned how to use it. Even now, more than a decade after that misfire of a photo class, I still feel like I'm weak in some of the fundamentals that my peers grasp so easily.

But it's still fun to retrace my steps and land on that downtown Chicago sidewalk, and realize that I can pinpoint the moment I became a photographer. Even if it was just by dumb luck.
Posted by The Professor at 9:53 AM