The 10 Most Embarrassing Movies in My DVD Collection 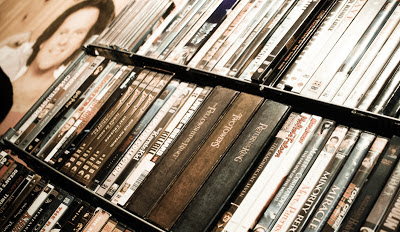 In a world pushing to consolidate our belongings onto digital devices as small as humanly possible, I'm still kind of old fashioned when it comes to my media library. When I go to a friend's house, I still like to see a row of books to browse, or a line of CDs to judge maliciously. But such judgments have to be at least a bit reserved, because as I look at the rows of DVDs next to my TV, I realize that in my heart I am as human and flawed as the next guy.

Here are the 10 most embarrassing movies in my DVD collection, presented in the order I felt like writing about them, along with my token attempt to justify their purchases:

"Arthur" is a classic early-80s comedy about a spoiled rich-boy drunkard that was made before it occurred to anyone that making alcoholism funny might not be the best idea. "Arthur 2" is one of those movies that is only watchable at about 2AM on cable when you absolutely refuse to go to bed. It also happened to come in a "Comedy Double Feature" DVD set I picked up for $10 a while back in order to get the original. Verdict: Sort of justified.

You wouldn't think a guy who had taught English classes for 10 years would be embarrassed to have a copy of "Romeo + Juliet" on his movie shelf, even if it is the Baz Luhrmann version. But as a red-blooded American male, I do wonder what kind of impression it will make. I got it from my sister when we divided up her Baz Luhrmann boxed set. She kept "Strictly Ballroom" and the special features DVD, and I got "Romeo + Juliet" and "Moulin Rouge." Verdict: Kind of, sort of justified.

There's no reason to be apologetic about being a Tim Burton fan. I even kind of enjoyed "Dark Shadows." Still, even longtime Burton fans would probably admit that "Mars Attacks" wasn't his best effort. But there I was in Logan one cold night in grad school, determined to expand my DVD collection, and "Mars Attacks" was only $9. I don't know; maybe I should have kept browsing. Verdict: Not justified.

Prime example of why sometimes seeing the movie before the book ain't always a bad idea. Most fans of Frank Herbert's sci-fi novel despise what David Lynch did to the source material. But I just remembered a cheesy Toto soundtrack, a laughable blue space-speedo for Sting, and lots of outer space surfer-dudes riding on the backs of giant sand worms. So I bought it. On blu-ray. About five months ago. Verdict: Probably not justified, but I really don't care.

"Elizabethtown" is widely viewed as one of Cameron Crowe's lesser films, and it offers Kirsten Dunst haters plenty of ammunition. But in spite of the romantic comedy elements, "Elizabethtown" is more a story of a young man learning about where he came from, and about the father he wishes he'd known better. And it finishes off with a fantastic road trip sequence, scored by some great Crowe selections. "My Father's Gun" may not do for "Elizabethtown" quite what "Tiny Dancer" did for "Almost Famous," but it did enough to get it on my shelf. Verdict: I don't care what you think. Justified!

It's true that I own the entire Star Wars prequel trilogy (two times over, if you count my new blu-ray set). It's also true that I recently wrote an article for the Deseret News explaining why I felt the prequels fell far short of the originals. As much as the critic in me would like to tell you that the first time I saw "Phantom Menace" I was terribly insulted and never returned, the truth is I probably saw that movie in all its Jar-Jar-infested glory about a dozen times in the summer of 1999. If it helps, I can't actually remember watching the DVD since I bought it. Verdict: I am a sad, conflicted human being.

I think I was more exciting about getting a new release DVD for five bucks than I was excited about getting a copy of "Spider-Man 3." Honestly, I liked the first two better, and I don't own either of them. But in its defense, SM3 wasn't quite as bad as some would have you believe. I actually enjoyed the James Brown sequence.

(OK...fine. I just re-watched the clip. That was pretty bad.) Verdict: Not justified.

9. Pirates of the Caribbean 3: At World's End

Another example of me owning a sequel but not an original. I liked the first Pirates movie, had no desire to see the second (I think I caught it on cable), and was only interested in seeing the third because I heard that Keith Richards would make a cameo as Jack Sparrow's dad. So when my buddy Bob offered me his copy because he couldn't see his kids having any interest in the film, I accepted his gracious gift. And haven't watched it since. Verdict: Kind of, sort of justified.

If you're only going to own one Michael Bay film...this probably isn't the best choice. From the ridiculous love story tacked loosely onto an American tragedy to the sweeping adult-contemporary flagship single from Faith Hill, "Pearl Harbor" was one of the most obvious attempts to cash in on the "Titanic" formula. When I picked it up used I told myself it was just for the action scenes, and when backed into a corner I would hide behind the Beckinsale crush again. But I have to be honest here: I paid money for a bad movie. It wasn't the first time, and it probably won't be the last. Verdict: Not justified, running in slow motion away from an explosion at a low angle.
Posted by The Professor at 11:28 AM