The more time I spend writing film reviews on my iMac desktop or polishing pixels from my latest digital photo shoot, the more I appreciate building things with my own two hands.

Example #1: Back in the 8th Grade I took a metalshop class as a follow-up to the woodshop class we were required to take the previous year. My woodshop efforts were weak at best, but in metalshop, we got to use welding torches, which gave us motivation. I don't know that I've ever been as proud of a gift as I was of the six cast-iron hot dog cookers I gave my mother that Christmas. Of course, I can't think of a more misdirected gift, either. 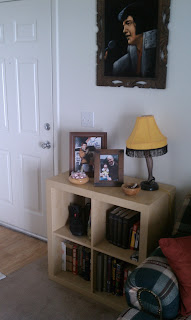 Example #2: Six months ago I moved into a loft apartment in Bountiful. It's been my first experience without roommates, and a quick lesson in all the day-to-day items I'd been taking for granted. I mean, I was happy to contribute the Velvet Elvi, but I always just assumed that someone else would bring the microwave. Furniture was another of those items, and so I fled to that great panacea of affordable furniture to fill in the gaps: IKEA.

I can't describe the odd sense of satisfaction I derived from following a set of painfully simple instructions to assemble a basic easy chair and shelf unit. They can't have required more than a second grade education to build, but the process of tightening bolts and screwing together pre-fab sections of wood-like furniture parts made me feel productive in the same way that knocking doors made me feel productive in the mission field. It may not have been the most challenging or effective of tasks, but it FELT good.

Then last week I ramped up the stakes and ordered a new computer desk from Office Max. No more simple Swedish furniture for me! It was time to play with the big boys. Of course, my first task was finding a way to drag the box of unassembled parts up two flights of stairs into my apartment. (I guess doorstep delivery is a relative term at FedEx.)

From there, the next item of business was to open the box, scatter its contents around my living room, and decide whether to make lunch instead. I shrugged and told myself that I would at least start the process, then take a break to eat. But at some point "start the process" became "build the whole thing," and a few hours and a skipped meal later, I had scored a few more points on my man card.

I guess this manly impulse to build things is the same thing that convinced me to join a framing crew the summer after I finished grad school, or that made me feel so good about helping my uncle install a new water heater over the holidays. As incredible as technology can be, I think it can remove us from experience as much as it can expand it.

That's also why I think no matter how convenient it is to load thousands of books onto a digital tablet, or how how easy it is to load news onto a website in real time and bypass the printing process, there will always be a place for books and newspapers in some form. Not because of the sense of satisfaction that binders and printers enjoy; rather, because living too much of our lives through LED screens can deny us of one of our five senses. Now, your guess is as good as mine what they will look like, or if they'll be nothing more than a nostalgia item like the sports almanac in "Back to the Future II." But one way or another, the physical experience will endure.

Not that I'll have a problem buying pre-assembled furniture in the future. Or letting someone in coveralls haul it up my stairs.
Posted by The Professor at 3:17 PM