The Zen of Josh: Philosophy #51

Never Park in Another Man's Driveway... 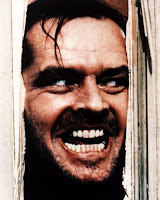 The point is that when you visit another person's house, just park on the street. People who park in other people's driveways inevitably block someone in who is trying to leave, or block someone out who is trying to get in, and there are few things that annoy me more than arriving at my driveway to find that some mystery vehicle has camped out in my path. A man's driveway is sacred, as is his rhubarb. Just ask Jack Nicholson. He's the one who inspired this comment in the first place.
Posted by The Professor at 10:22 AM