A Question of Semantics...

Sometimes I wish Facebook would change the "friends" application to an "associates" application, or at least send a boilerplate message to anyone who wants to add me as a friend. Because I keep getting these invitations from people I don't think I've ever met before, let alone formed any kind of strong relationship with. Generally, unless I can place them specifically within at least a tangental circle of mutual friends, I ignore the requests, and I feel like a jerk for doing so.

If Facebook let me send out an automatic message to potential adds, it would say something like this: 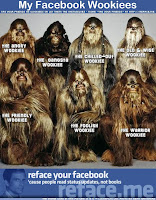 "Hello there, (name of prospective friend). I am flattered by your intentions. But please note that if I have never met or spoken to you before, I probably won't add you unless you click on the 'add a personal message' link and give me some context for your request. I don't mean to sound cocky--I understand as well as anybody that the 'friend' application is for networking as well as keeping track of my high school friends--but it just strikes me as weird to add someone you've never met before without giving them a reason for it."

Several months ago a girl I'd never met or spoken to added me to her network. She included a message explaining that a mutual friend had showed her some of my photos and she wanted to be able to see more. Aside from being flattering, it provided a reason for an association. A reason other than "you are a human being who is not on my network. Join my network."

I want to be your friend, I really do. I just want to know why you want to be mine.
Posted by The Professor at 9:22 AM