The other day I was having an interesting conversation with my roommate Mark. Mark and I often have interesting conversations, many of which center on topics like independent film, how I need to finish my drives with more confidence while slashing to the lane in basketball, and how his decision to move to Provo now that he has finished law school may or may not constitute social suicide. 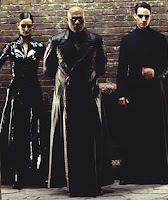 But this day we were talking about "The Matrix", and how it takes nearly 45 minutes before you even find out the context for all the weirdness you are watching in what you supposed was your conscious reality. ("There is no spoon!") What we concluded was that it would be cool to go back and re-experience some movies for the first time, if only to have the fresh experience of having your world flipped upside-down by some cool plot twist, like the ending of "Sixth Sense".

I remember the day I walked into the "Revenge of the Sith" on opening day. It had occurred to me that this would be the last time I would ever walk into a "Star Wars" movie for the first time. The first time I'd see that opening line and the 20th Century Fox logo and all that stuff, without knowing what was going to come next. That's a pretty cool feeling.

Here are a few of the movies I wish I could experience again for the first time:

I don't actually remember seeing this in the theater, though according to my parents I saw it when I was about six months old. Apparently I was afraid of the Jawas. Given the impact that this movie had on my childhood, as well as the constant string of creative efforts I've pursued since then, I would love to be able to watch "Star Wars" again for the first time, if only to see that first shot of the Star Destroyer sweep across the screen. 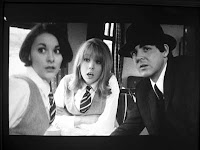 Not long after diving headfirst into my own delayed Beatlemania phase in the fourth grade, my parents let me rent their first movie, "A Hard Day's Night". I really hate using this term, because it's pretty cliched and kind of creeps me out, but I still remember how fresh the Beatles' music sounded when I was first hearing all of it. There is a quality--especially in their earlier work--that is very alive and enthusiastic. The movie reinforced that, and ramped up my enthusiasm for them (even though John Lennon had already been dead for several years by that point). I loved the energy and dry humor and fast-talking wit, from the desperate races through the streets to the traincar conversation with the stuffy old coot to the coy discussions with every girl they encountered along the way. Plus all the "new" music--the stuff I hadn't heard yet--was awesome. The only negative was that I was disappointed to find out that they were all chronic smokers (boy, was I in for a surprise). It wasn't until a couple of years later that I got into their later stuff (my mom only had the albums up through "Revolver"), but "Hard Day's Night" is a perfect example of everything that was great about early Beatlemania, even if I wasn't there when it happened.

I do remember going to see "The Empire Strikes Back", though only vaguely. I remember thinking that it was pretty obvious that Darth Vader was lying to Luke when he told him he was his father. I mean, it was Darth Vader, right? How could he be trusted to tell the truth? He'd just lopped off Luke's arm, for Pete's sake. But now, in my more matured condition, I can't help but wonder what it would be like to see this movie for the first time and have that moment hit me fresh. A lot of people consider Vader's revelation to be the greatest movie twist of all time, and I think I was just too darn young to appreciate it.

A couple of years ago I got together with some friends to watch a movie, and we happened to put in the "Jaws". I'd been watching the movie for years, but there were a couple of people in our group who had never seen it before. I can't tell you how fun it was to watch their reaction to all the scary bits. I had totally forgotten how genuinely scary that movie was. It would be awesome to go back and see the fish chum scene for the first time.

It's kind of hard to explain this, but "Back to the Future" is one of those movies that is totally underrated because it is so totally popular. I mean, with all the Universal Studios rides and the pop culture references and such, you kind of forget how good the movie really is. You just assume it's another of those hugely popular 80's movies like "Ferris Bueller" and "Top Gun", then you actually go back and watch it and it almost knocks you out how genuinely fun, sincere and well-written the thing is. I really think it's one of the last family comedies that could appeal to young and old audiences without offending either. (I'm guessing a lot of people will argue in favor of all the Pixar movies here, but unlike "Back to the Future", with the Pixar movies I'm good after seeing them once). So what I'm getting at is it would be great to have that experience again. 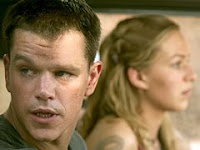 I actually like "Bourne Ultimatum" more, but the reason I wish I could see "Supremacy" fresh is to erase the experience I had seeing it the first time. Because every time I watch "Supremacy" now, I am reminded of the 55-year-old jerk who was sitting next to me, jabbering to his wife through the whole movie. At the end of the car chase scene in Russia, when I got fed up and shushed this guy, he actually had the nerve to tell ME to shut up. I was absolutely dumbfounded at this response. Before I just thought he was an idiot who talked his way through movies; now he was one of the most quintessentially oblivious and inconsiderate jerks I had ever encountered. Plus he wore those super-ugly Dockers shorts that only came a third of the way down his lanky old-man thighs. I was completely possessed by the desire to pound this guy into oblivion, or at least tell him that if his wife was too dumb to understand what was going on, that the two of them should wait and just hire someone to deliver a copy of the movie to them in their lobotomy recovery ward when it came out on video, but I was too stunned to even respond, and I didn't want to become the very thing I was feeling so self-righteous about, so now I'm stuck wishing I could see the movie over again and clean my memory out.

Part of the reason I wish I could see "Almost Famous" for the first time again is because I had such a GOOD experience the first time. I was going through one of those social low-points, where a relationship I had been busting my tail on had completely shattered and lay in a shambles at my feet. In this state I turn on a movie that is essentially a movie-version of the Wonder Years TV show, written by a guy who clearly loves music at least as much as I do. I see the scene at the top of the ramp after the concert and the sceneon the tour bus and the phone call scene at the end of the movie, and at the end of it all I get that great feeling that comes along every once in a while that reminds you that in spite of some crap turns, life is going to turn out totally cool. And the movie still makes me feel that way today.
Posted by The Professor at 8:59 PM