The news hit like a slab of warm butter on a windshield...the feds just blew the cover on 24,000 of their old spies, and you probably know a few of them.

Remember Julia Child? That french chef? She was a spy. Oh yeah, she was packing bugs in those pastries, slipping throwing knives in her knicker straps, and tucking a little pouch of cyanide pills in her rolling pin. Hard to believe, but it looks like the Pampered Chef was living the kind of life Sean Connery was only pretending to live onscreen.

How about Ernest Hemingway? His kid was a spy. So was some catcher with the Red Sox. And remember the crazy general from "Dr. Strangelove"? The one that orders the nuclear attack because he's convinced the commies wanted to sap and impure his precious bodily fluids with flouride? Turns out the guy that played him knew more about it than we thought. 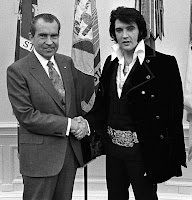 Whenever the worlds of politics and celebrity collide, good times always follow. We don't have to look any further than the night the King of Rock and Roll staggered over to the White House in a black velvet overcoat and demanded that President Nixon make him an official drug enforcement agent. The photo op that came out of that gem was one for the ages.

But some people don't like it when the Beltway meets Tinseltown. John McCain even made an ad about it. He thinks Barack Obama is on a par with Britney and Paris, and he's probably right. But I've got bad news for you, senator. It's nothing new, and it won't keep Obama from getting elected. We crossed that line back when John F. Kennedy showed the world he was prettier candidate than Richard Nixon. So Nixon went on Laugh-In. Clinton went on Arsenio. President Bush is on the late-night talk shows all the time, and he's not even trying.

When I was a kid, growing up in the tough suburban ghettos of Bountiful, Utah, I didn't know a thing about Ronald Reagan's policies. I knew he was the president, and I also knew he was the guy in the Superman outfit in that Genesis video. To me, politics and comedy were the same thing. Twenty years later, my generation is more likely to get their news from Jon Stewart and Conan O'Brien than Katie Couric.

So my advice to senator McCain is this: Johnny Boy, it's too late to fight it, so you may as well join it. Jump in head first, get yourself a posse, cut a rap album, and make a cameo in the next "Batman" movie. For Pete's sake, man, you lost the bobblehead giveaway to Obama in every state. You've gotta do something. If the other guy can go on the Ellen DeGeneres show and get down with his bad self--TWICE--and still hold a lead in the polls, then maybe he's onto something. 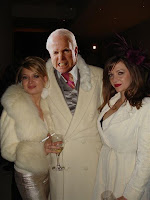 Maybe it's that we're just shallow, and we deserve what we get. Or maybe you really are a celebrity, whether you like it or not. So you may as well act like it.
Posted by The Professor at 11:19 AM