Sunday night I returned from my third pilgrimage to the Windy City since I finished my mission in November of 1997. This time around I went with my longtime friend and conspirator Randy Pinson of Rocket Auctions, Inc., who was attending the e-Bay Live! conference in the Loop. I have documented our adventures by topic.

One highlight of any great trip, and certainly any great trip to Chicago, is feeding your face. There is no shortage of quality venues that are up to the task, and there is even less of a shortage of venues that are eager to tell you that they are up to the task. Indeed, one’s challenge in Chi-Town is not finding a spot with reputation, but sifting among them to find the ones that deserve it. Here is what we found: 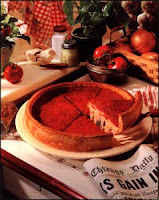 The first night we got into town, we went to the only place I consider an absolute mandatory stop on a trip to Chicago: Giordano’s. I have already documented my interest in the place, but it deserves every possible mention. Besides, this time I had their Bruschetta appetizer. In spite of the recent tomato scare, Giordano’s still piles the Bruschetta with three inches worth of diced tomatoes and onions. Then they follow that with a deep-dish pizza stuffed with meat and sauce that only the manliest of men (or, to be fair, the manliest of women) can handle for more than two slices. This stuff is for champs, and once again, I am depressed to have to face a pizza anywhere else.

The next day, while Randy was eating an overpriced sandwich at the eBay conference, I wandered into a little place called Devon’s Seafood Grill. It looked kind of swank, but not too swank to refuse service to a guy in a T-shirt and shorts, so I opted to venture inside. They sat me at the bar, and I ordered their chipotle grilled shrimp appetizer along with a bowl of spicy creole gumbo. The gumbo was great, and the grilled shrimp was quality, but far from “Top Five” status (more on that later). Overall, the food was good but mostly priced for the show. My only gripe was that every interaction I had with the bartender was kind of awkward. I really don’t know what his deal was. I was just trying to be friendly, but he kept acting like he wanted to hide under the bar, so I don’t know if he was just shy or if I reminded him of a bald-headed authority figure who used to make him do extra push-ups in his 8th grade gym class.

Which brings up another thing: I hate sitting at the bar, the counter, or whatever you want to call it. Just because I’m by myself doesn’t mean I want to sit up on some tall stool and let all my blood rush to my feet, especially after walking for blocks and blocks around the city. It totally blows, and I want my own stupid booth.

On Thursday night Randy and I attended a special banquet for the eBay “Voices”, a group of sellers that contribute to informative discussions with eBay employees about how to make their site run better. The upside was that it was free food; the downside was that you had to sit at big tables with people you didn’t know and listen to eBay topics the whole time. But like I said, more on that later. The food was pretty good, the desserts were better, etc. etc.

After the Voices banquet, Randy and I made our first music stop of the trip, at Buddy Guy’s Legends. In spite of the fact that I had just come from an all-you-can-eat banquet, I still felt constrained to order the Blackened Bourbon Shrimp and a slice of Key Lime Pie while enjoying the strains of Eddie Shaw and the Wolfgang. The pie was pretty good, though far from the quality of the Joseph Smith Memorial Building Bakery (hereafter referred to as the JSMBB, though I don’t think I’ll actually be referring to it again). The shrimp was another story. The shrimp themselves were quite large and wide, which was good, but the “blackened bourbon” sauce tasted kind of funky. Like bourbon, I suppose. Or like a sauce that may-or-may-not have alcohol in it still, I guess. So there’s a solid chance I broke the Word of Wisdom on Thursday night while eating jumbo shrimp.

Ed DeBevic’s (2 ½ stars out of 4)
Somewhere by the Hard Rock Café…like 700 North and LaSalle or thereabouts
Cost: $17 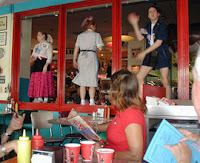 The next morning, while Randy was being wined and dined by a group trying to convince him to outsource his customer service responsibilities to China (which I think everyone should be able to do even if they aren’t technically a business), I went to a 2nd tier “must-visit” spot in Chicago: Ed DeBevic’s. Ed’s is kind of like a more authentic, more fun version of the Galaxy Diner that used to be by the 5th south freeway entrance in Bountiful. I think it’s some generic Chinese buffet place now. Ed’s place is very lively, where the help interacts with you and expects you to play along with their snappy 50’s-esque attitudes, their table dancing (to James Brown, quite nice), and their constant singing. Which is why it is so ironic that every time I go there I’m in a “don’t bother me; I just want to eat” mood. And once again, due to the crowd, they tried to get me to sit at the counter. But I denied them, and got my own booth, and I took their silly hat off after about 30 seconds. I just wanted to enjoy my bacon burger and my five-dollar shake. And I did.

Friday night’s food festivities were a potential disaster that turned into triumph. This little shindig was for the top-rated eBay Power Sellers, which of course meant I had no business being there. When we first arrived, a quick scan of the offerings led us to believe that the event was more of a finger-foods collection, consisting of pasta and four different types of mushrooms.

But then I spied a meat station, where someone was dispensing turkey and roast beef. And then I saw a guy walk by with all kinds of jumbo shrimp on his plate, and things got way, way better. After ten jumbo shrimp and two Sierra Mist’s, we hit the dessert bar for some key lime things, some fruit tort things (good but not as good as the JSMBB—Ha!), and even a chocolate covered strawberry. I did not eat my roll. 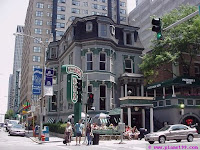 After the banquet, Randy and I hustled over to the Blue Chicago to catch 1 ½ sets from the John Primer Blues Band. After the music, we walked out into a perfect downtown summer night, marveled at the lively streets and warm summer air, and concluded that since we were heading to Freeport the next day, we should make the most of our last night in the Loop. So we went to this spot called Pizza Due, which turned out to be the little brother to Pizza Une, both of which are famed Chicago pizzeria-pubs on a par with Giordano’s. Pizza Due is tucked away underneath some building, arranged pub style with dim lights and tons of cool Chicago-related photos on the walls. The pizza (deep dish, of course) was not quite as good as Giordano’s (which is no sin), but it was still far superior to anything that doesn’t originate on the western shores of Lake Michigan. Cool atmosphere, great food, and the joint is open until 2:30am. I really, really, really wish we had places like this in Salt Lake.

When we checked in late Wednesday night, the concierge had given us complimentary breakfast coupon-things for every morning of our stay, but due to sleeping in or being rushed, the only time we used them was on Saturday morning. So around 10am on Saturday, Randy and I sauntered into a posh little restaurant on the 5th floor and tried to figure out what we could score off the menu for free. Well, actually that’s what I did, because I am cheap. Randy makes money, so he just ordered what he wanted and paid the difference. Over a fine spread of fresh fruit and bacon, Randy and I discussed some of the finer points of life, such as my tendency to throw my weight around when it comes to itineraries and how my bad fashion sense might be keeping me single. I realize that the last statement might make Randy sound like a jerk, but let me say first that the advice was solicited, and second, I think he might be right on both counts. Though in my defense, I don’t quite think it’s fair to judge my wardrobe based on what I brought on a trip to Chicago or what I usually wear when I stop by Casa Pinson, meaning: I don’t get dressed up for married guys. 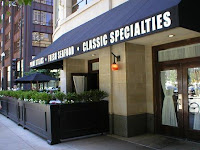 My original plan was to hit Giordano’s for a second time before heading out of the city, but after considering Randy’s opinion above, I elected to let him call the next shot, and just pray that we didn’t wind up at a place that exclusively dealt in tuna fish and macaroni and cheese. After lots of walking, we landed at Petterino’s, which may just become the second “must-visit” food stop on any future Windy City pilgrimages. Judging from all the autographed celebrity caricatures that cover the walls of the place, I’m guessing Petterino’s is a place of no small reputation. The food was awesome. I got a skirt steak that was about a foot long, and the jumbo shrimp cocktail we had ranked a cool #3 on my all time Top Five. Here are the current standings:

What got Petterino’s on the top-five list was not just that the shrimp were really large, but they also had a meaty texture that set them apart from most other venues. It’s very hard to describe, but very obvious to the taste, so you may just have to trust me on this one. However, I doubt any shrimp will ever take over the top spot from Deanies. 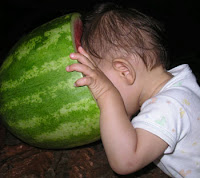 After stopping by the Freeport Ward Sunday morning to reconnect with some old mission friends (I spent five months there back in the summer of ’96), Randy and I were invited over to the home of a former stake missionary couple with the bait of fresh watermelon. As I have a fond weakness for watermelon (one of my most vivid childhood memories is buying a 40 pound watermelon from Dick’s Market with my friends Brian and Breto), we indulged ourselves. The décor was wonderful, the service personable, and the watermelon excellent. Truly a perfect way to wrap up a trip to Chicago.
Posted by The Professor at 7:00 PM