A Spoiler-Filled Review of "Iron Man"!

In order to be fair, I should admit that I saw “Iron Man” at the Drive-In, which is not the best way to do justice to a film that relies on special effects and sound presentation. On the other hand, that also means that:

1. Drive-In’s still exist in the United States, and
2. I am still attending them

Enough disclaimers. Viewing context aside, I still really enjoyed “Iron Man”, and not just because they cut directly to the killer guitar solo from the Black Sabbath tune of the same name while rolling the closing credits. I’d say “Iron Man” was a good comic book movie, but that would be a backhanded compliment at best, since most comic book movies blow serious chunks. No, I will say that not only was “Iron Man” a pleasant surprise, but it’s a pretty good flick on it’s own.

The premise here is pretty simple: ultra-rich capitalist jerk becomes noble humanitarian after life-changing abduction by terrorists, then uses his techno-prowess to create a flying suit of armor, then using it to kill aforementioned terrorists and a bald version of Jeff “The Dude” Bridges. Sorry, I just gave away one of the major twists of the movie.

Robert Downey Jr. plays the Iron Man, which I’m sure is a welcome change of pace over spending the last decade in and out of drug rehab. In a way, that makes his redemptive lead more sympathetic, and more real. Real is good. 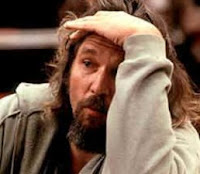 As previously mentioned, Jeff Bridges is also in attendance. But I already blew his backstory, so we’ll move on.

It’s hard to say what makes this film work while so many other comic book flicks don’t. Characters like Batman and Superman have evolved well beyond their comic roots, and are more of an accepted part of popular culture. I think that’s part of the reason they’re more successful. (Another reason is that “Superman II” is absolutely hilarious). But Iron Man is in more of the X-Men, Fantastic Four category…heroes that non-comic-fans have heard of, but who are still considered comic territory. 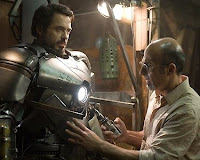 Still, the “X-Men” movies were really good, and I didn’t even bother watching the second “Fantastic Four” movie, even though it had Jessica Alba in it. I think a lot of it had to do with story, as in, “X-Men” had a cool one. And so does “Iron Man”. Plus, as I said, it had a bald Jeff Bridges.

So there you go. “Iron Man” is good because it has a good story and a bald bad guy. Well, a bald guy that is eventually revealed to be bad, anyway. Sorry to blow that one again.

“Iron Man” is rated PG-13 for general mayhem, a stripper pole joke, the strangest superhero casting decision since “Michael Keaton as Batman”, and the near-unforgivable act of destroying a replica of the single baddest car of all-time. 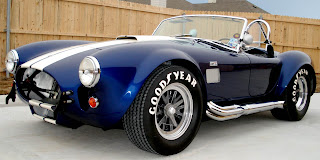 Posted by The Professor at 9:48 PM