Over on my bookshelf I keep a small 3X5 photograph of a church in Joliet, Illinois. It’s not an LDS church; in fact, I don’t even know what kind of worshipers go there. All I know is they’re not keen on Mormon missionaries.

As a missionary in Illinois years ago, I used to drop in on neighboring congregations from time to time. I wondered if they would be like the congregation at the beginning of “The Blues Brothers”, or if they might invite me up to preach for a while.

They weren’t, and they didn’t.

Instead, most of the time we would get harangued by the local minister, who’d corner us after the service and launch into some sort of Bible-bash. Stupidly, I’d let myself get drawn in, and inevitably go home feeling frustrated because there was never any interest in conversation, only competition.

But things boiled over when I was serving in Joliet. Joliet, Illinois is a colorful town, to say the least, a city of around 200,000 people an hour south of Chicago that boasts two major prisons, an asylum, and three riverboat casinos. This is why it is always ironic to say, “I served in Joliet”.

We lived in a basement apartment of a house on the west side of town, where you could frequently catch chickens walking across the road as you drove through. One cold Sunday night in January, I trooped into a local church with my companion and our Spanish-speaking roommates to catch a late service. The chapel was massive, and only partially full due to the late start time. The dreary atmosphere of the Illinois January outside transitioned perfectly into the macabre shadow and emptiness inside the building, and for forty-five minutes we watched as a pair of enthusiastic preachers stomped and wailed back and forth across the stage, working a massive PA system to scattered applause and calls of appreciation.

Then as the service was wrapping up, the preacher in charge called attention to the four kids in shirts and ties who had come to visit. One by one we introduced ourselves and gave our sincerest greetings, until Elder Diaz mentioned that we all carried the Book of Mormon.

The moment he did, the preacher cut him off, and the pleasantries ended. For the next ten minutes, as we stood there in a row, the preacher ranted and mocked and told everyone why he thought we were the devil incarnate. The concert-worthy PA jeered and sneered at us, making it quite clear that our message was not welcome within their walls. The scattered patrons called out their two cents, then in a move that still amazes me today, one of their Deacons held out the collection plate to us as we filed out the front door.

It wasn’t anything we hadn’t heard or experienced before—though never quite through so much wattage—but as we made our way back to our Ohio Street apartment, the night felt a little more oppressive than usual. I’d been in the area for a little over two months, and what little success I’d seen had been modest at best. The Spanish boys weren’t doing much better. The preacher had crystallized the feeling we’d all felt building over the weeks: the town was totally against us, and there wasn’t anything we could do about it.

When we got home, we gathered in the Spanish Elders’ bedroom and talked about our situation. To his credit, my companion Elder Ayres was trying hard to be optimistic about the encounter, since truth be told, we had contacted a large group of people about our message. Still, we all felt kind of humiliated, and were made painfully aware of our own weakness.

But then we realized that it really wasn’t about us. We weren’t the source of the message; we were just the couriers. Who was really in charge, anyway?

Bit by bit our spirits lifted as we started to realize that it didn’t really matter what some late-night preacher said, because if we truly had the right message, no one could stop it anyway. Slowly pessimism and doubt changed to optimism and hope, and finally to sincere excitement. We were going to show that place who was really in charge.

Over the next two months, the area transformed. We didn’t baptize thousands, or even hundreds, but something had changed. I did see more success in those four months than in the rest of my mission combined, but it wasn’t just the numbers that were different. It was the attitude. We had momentum. We had faith. Opportunities started to pop up more frequently, and in time, the area split, the local members got more involved, and little miracles started to happen. Shortly after getting transferred to the area, a member of the ward had told me his inactive family had decided to have their records removed from the Church. Before I left, I watched this same man baptize his nine-year-old daughter, fully active and worthy of the Priesthood.

It wasn’t me; I had hardly anything to do with it. I just finally figured out who was in charge. 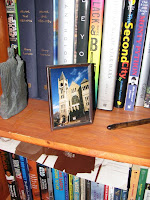 Before I left town for my next area in South Chicago, I had Elder Ayres pull over in front of that old church. I wasn’t going to go confront the pastor, or do anything spiteful. If anything I would have thanked him, anyway. The best statement I could make was to stand in front of the place while my companion took a single photograph to remind me of what we had learned by visiting it.

In the years since, I have never forgotten what happened to me in Joliet. But I haven’t always remembered, either. Memory is kind of funny that way. The frustrations of the mission changed after I came home. Sub-Zero wind chills became murderous college courses. Door slams became employers that didn’t want to hire me. Investigators that stopped taking the discussions became girls that didn’t feel like dating anymore. Brand new areas became the general feeling that I was meant to do something with my life, but I just didn’t know where to start. The circumstances and the details changed, but the principle stayed the same.

And yet often I still get hung up thinking it’s on me to do all of this stuff. I try and fail repeatedly, then throw my hands in the air because I know that in spite of everything I do, timing and circumstances and “what’s best for me in the long run” will ultimately overrule any agenda of mine. I never doubt that the Lord is capable of delivering a blessing, but sometimes I doubt that he will, or that he wants to. As Stephen Robinson might say, I believe in Christ, but sometimes I struggle to believe Christ.

Then I’ll have one of those epiphanies and get my head on straight, and go right back to work again. Not because I finally got a break, because in the depth of my humility the Lord decided to throw me a bone, but rather because I saw things a little more clearly, and chose to act. Because belief is a choice. Faith is a choice. That’s taken a long time to learn.

It helps to have a little picture around to remind me.
Posted by The Professor at 3:20 PM