The Catch of the Day

Last Friday marked two months that the KJZZ Cafe has been on the air, and after that span of time, my two biggest surprises have been:

As for #1, from what our News Director tells us, the ratings are actually going up. Of course, I have no way of really confirming this. I just tend to trust what my News Director tells me. Tomorrow morning he could announce that aliens have purchased KJZZ from Larry Miller, and I would just say, "sounds great, Dean. Would you like me to start writing for the extra-terrestrial demographic?" 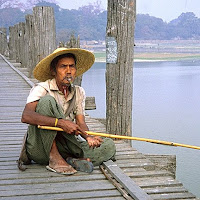 Surprise #2 is actually a bit more shocking, though a pleasant surprise at the same time. My natural inclination is to write comedy rather than hard news, as anyone who has read this blog will attest. Check that...my natural inclination is to attempt to write comedy rather than hard news, so I wasn't quite sure how I'd fit in on a straight news show. But so far it seems like the Powers that Be are amenable to the idea of presenting a show with a sense of humor, and I've tried to take advantage.

One of my favorite segments to write is something we call "The Catch of the Day", an Internet video--usually yanked from YouTube--that is either appropriate to a daily topic, very popular, or just something I find funny. It's "fresh off the Net", so to speak.

Anyway, here are a few of the clips we've run over the first two months, along with a bit of interpretive commentary. (After all, the KJZZ Cafe is about analysis, right?)

Somehow in all of my YouTube travels, I missed this one until about three weeks ago. I can't say much about it without giving the punchline away, but this was a perfect opportunity to get something on the air that really fit my comic "style". And yes, we did have to do some censoring at the end of the clip.


The Onion on Nascar:

It's not very often you can find anything on the Onion (text or video) that can be shown on the air, but this was a great exception to the rule. This clip is a wonderful example of how a writing team like The Onion can take a one note joke (Nascar is nothing more than turning left) and not just milking it for two and a half minutes, but making it really, really funny for two and a half minutes. My personal favorite moment: the blank look on the anchor's face when the guest is explaining how Nascar tracks are oval-shaped, as opposed to circular.

I linked to this ad in a previous post, but here I'd like to explain my affection for it. The reason I find this ad so hilarious is not because it is sending the message that a woman should "keep a good shape" for her husband. That's the same message most ads send today. The difference is that this ad states it so explicitly, without any attempt to soften the blow or make any token nod towards female independence. I would have given good money to have been in the planning room when the ad agency dreamed up this one.

Those that know me well are aware of my unexplained fixation with (now former) Cuban dictator Fidel Castro. I've got this great poster of him playing baseball on my wall, and I even went as far as to write a 200-page novel about his beard. Needless to say, with all the hoopla surrounding his recent "retirement", I had to take the chance to give him my own kind of nod on the show. I showed this clip--taken from Woody Allen's "Bananas", a parody of Latin American political instability--for Catch of the Day on the day he officially stepped down.

On the anniversary of Mr. Rogers' death, I came very close to showing a clip of his show where this ten-year-old kid tries to teach him to breakdance. But as weird as that one was, it still wasn't even close to the level of insanity as this clip, one in a series of phone pranks where a guy with a computer calls up random people and plays them sound bites from some celebrity. I'm pretty sure it's the same program Mitt Romney's kid used to get him. Great stuff.

Might be my favorite Catch of the Day so far. I don't even remember why early one morning I got on a kick of looking up crazy Japanese game show clips on YouTube--do you even need an excuse at 3AM?--but after a long and dedicated search, this one took the winner's spot. Just too many classic elements to describe, from the contestant strapped to a launch pad with rockets strapped to his legs, to the helmet cam that captures his face when he lifts off, to his ancient grandmother who has to answer enough trivia questions to keep him from getting launched, to his impassioned screams of "GRANDMA! GRANDMA" (with subtitles!) when he does, to the inhuman groans he lets out as he swings out over the canyon, to the muscle dudes in speedos that turn up in the next round, to...

Jeez...you see what I mean.

Incidentally...if you have any clips you'd like to recommend, I'd love to see them. Always looking for a good catch.
Posted by The Professor at 2:01 PM