"So how many kids are in your family?" "Two. Listen, do you like Donovan?"

Back in the “old days”, during the three hapless years we tried to date girls before leaving on our missions, my buddy Breto and I had some odd ways of evaluating the girls we took out. Obviously they had to be attractive and all, and as time went on spirituality became more and more important. But usually Breto and I held our final judgment on whether the girl was familiar with our kind of music.

“Pretty good. She didn’t know who Donovan was, but we had a good time.”

For some reason Breto and I thought we were going to find a stunning seventeen-year-old beauty queen from Bountiful, Utah that was talented, spiritual, and carried a track-by-track familiarity with our favorite semi-obscure B-list 1960’s recording artists.

Steve Winwood would have to belong to that category, I suppose, though I’m more inclined to put him on my own personal A-list. “Little Stevie” cut his chops with the Spencer Davis Group in the mid-60’s before moving on to the progressive jazz-rock outfit Traffic and serving a summer-long stint with Supergroup Blind Faith in 1969.

I can hear the collective, “Huh?” coming from my six readers even now…

But even if you don’t know the bands, chances are you’ll know the music. The Spencer Davis Group recorded “Gimme Some Lovin’” and “I’m a Man”, a pair of tracks that are hard to miss if you’ve ever listened to an oldies station or watched a decent share of movies from the 80’s or 90’s. Blind Faith also included a guitarist named Eric Clapton.

If anyone is familiar with the name Steve Winwood, it’s through his solo work in the 1980’s, songs like “Valleri”, “Higher Love”, and “Back in the High Life Again”. This was the era when Winwood was winning Grammy’s and getting top-40 play.
But I always think of Winwood as one of the original Blue-Eyed Soul artists, like Joe Cocker and Mitch Ryder, a British R&B Soul Man that testified through my single favorite rock instrument: the Hammond B3 organ with the rotating Leslie speaker. That’s the guy I went to see last Monday night. 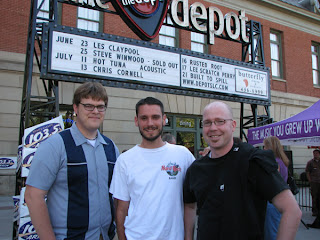 Through a bit of strategy and negotiation, along with some generous sacrifice on the part of my roommate, I managed to bring Breto and my old friend and fellow-Winwood fan Josh Christensen in tow. Breto and Josh had long ago fulfilled their dating quests by marrying and having children, but I managed to free them up for an evening with an old kindred spirit.

We arrived shortly after 6PM at The Depot, a Salt Lake club built in the old Union Pacific railroad station at The Gateway. I saw Leon Russell there about a year ago, and loved the feel of the venue. Perfect place for a guy like Winwood. While waiting in line I asked someone to take a shot of my compatriots and I, then shortly after, another dude in line suggested I get a photo with the local DJ’s who were sponsoring the event. 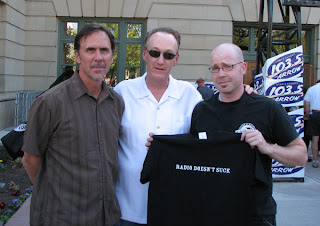 I obliged, not knowing I was getting a photo with former Z-93 legend Jon Carter of the “Jon and Dan” morning show. Carter was the early morning voice of my high school years when I was cutting my teeth on Led Zeppelin. Now with 103.5, Carter left Z-93 once they changed over to K-BUL Country 93, a move that forever convinced me that I would be a minority amid my Utah neighbors.

Once we made it inside, we were happy to land on the third row near the center of the venue, sticking me a rough 30 feet from Winwood’s trademark B3. I was even happier to learn that I would be allowed to take photos of the concert as long as I didn’t use my flash. This resulted in a 75% “way the h@!! too out of focus” shot rate, but I was still pleased with the results.
It was more than an hour before the show got underway, and so we kept ourselves occupied shooting the bull with each other and the people around us, while periodically finding ourselves glued to the monitors around the venue, which for some reason were showing a “Flipper” re-make starring Elijah Wood and Paul “Crocodile Dundee” Hogan. But finally Jon Carter and his 103.5 sidekick came out to introduce Steve, and the concert got underway.

Whenever I go see a concert from one of my old favorites, there’s a lingering worry that they’re going to favor their new unfamiliar stuff instead of play the old tracks I love. But Steve took care of that one right away, ripping into “I’m a Man” at the B3 with a backup band that featured a guitarist, a percussionist, a mean saxophone player, and a drummer. For the first hour they barreled through a series of songs that had a 50% familiarity rate for me, but featured “Medicated Goo” from Traffic’s “Last Exit” and “Can’t Find My Way Home” from the Blind Faith album. 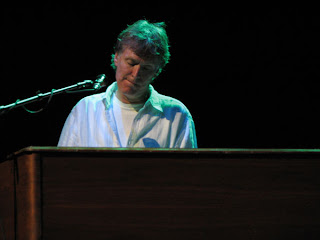 The B3 sounded incredible, and the supporting musicians were strong without being overbearing. Winwood would periodically shift back and forth between the organ and a guitar, letting the saxophone guy take over on the Hammond. After one number he delivered his traditional greeting to the local fans, expressing his thanks to be playing in such a "rather unusual place". I don't know if he meant the train station or Utah in general. 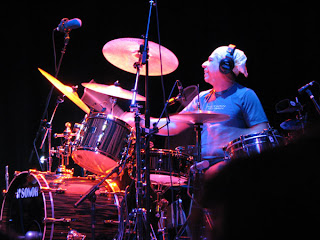 After a short break in the action, the band returned for the second half of the set, and soon Steve was ripping into some of his solo hits like “Higher Love”. 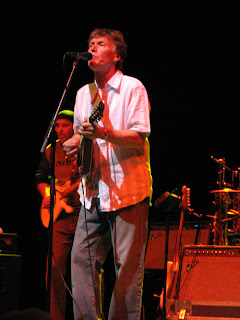 Then he whipped out a Mandolin and delivered a rousing version of “Back in the High Life Again” that almost brought the crowd to its feet.

See, that was the only real problem Monday night…hardly anyone wanted to get up. I don’t know if it’s a Utah thing, or an old people thing, but when you go to a concert that features a veteran performer playing fun, upbeat music, you should GET UP. Josh and Breto and I would try to get up here or there, but when you’re the only ones standing, your polite gene takes over and you sit down, since you’ve been the “person sitting behind the rude people that won’t sit down”, too.

There really should be some sort of policy for this. A few years back, before James Brown died and was serenaded to on stage laying in an open casket during the six months and possible abduction he endured before being buried, I saw the Godfather of Soul at the House of Blues in Las Vegas with my longtime friend Steve Jones. We were up in the balcony, which was tilted at such a bad angle that if you sat down you could only see half the stage. So we stood up.

Two rows behind us were a group of middle-aged women who obviously felt the best way to experience Mr. Dynamite was to do it on their lazy rear ends. Down on the floor I watched with jealousy as two-hundred patrons jumped and danced at his feet, enjoying the full fruits of festival seating.

What made it worse at Winwood, though, was that two seats over from me was a gorgeous brunette, who, like the friend she was with, also liked to stand up. Unfortunately the seat between us was occupied by her Churro Salesman boyfriend/fiancé, who remained seated even when the rest of the crowd jumped up to applaud at the end of each song. (For more on what a “Churro Salesman” is, click HERE.) Mr. Churro obviously had no clue who Steve Winwood was, not to mention what to do with the top three buttons of his white shirt, and once again I was crushed to see yet another beautiful young lady—one with great musical taste, even—wasting her time with the kind of guy that wouldn’t know Steve Winwood from his own boxer shorts.
Tragic. 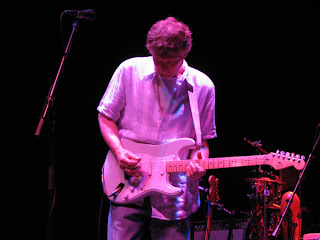 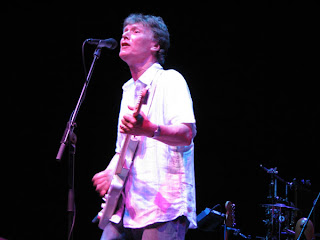 Luckily I still had a great concert to enjoy. Once Steve got through “Back in the High Life”, he swapped his Mandolin for his Fender Strat and surprised us all with a fierce rendition of “Dear Mr. Fantasy”, one of the great psychedelic rockers of the era. Amazingly, this complex tune was churned out by only three members of the band, while the percussionist and the regular guitarist took a break. Then the rest of the band came back out for an epic version of the Traffic anthem “Low Spark of High-Heeled Boys” that left the crowd amazed and exhausted. As the momentum built, another surprise came by way of a “Crossroads” cover, which ironically I had seen Eric Clapton do only a few months ago at the MGM Grand.

(Odd footnote on the MGM Grand: the whole time I was there I was compelled to think that I was in the same venue that saw all of those 30-second Tyson fights. But instead I was watching Slowhand do “Wonderful Tonight”. Weird.)

As “Crossroads” got going, my friends and I tossed caution to the wind and rose to boogie. Nuts to anyone behind us. Eventually most of the crowd joined in, and since the Churro Salesman had gone to dispose of some of the excess beer he’d been drinking all night, his girlfriend got to dance next to a guy that had real taste for a little while. 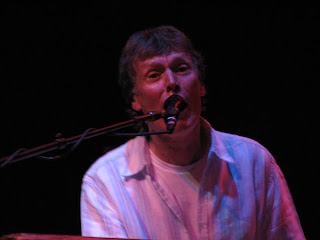 But that was not to last, as Mr. Churro eventually came back, and Mr. Winwood started into his final number. When it became clear that the band was playing what may well be one of my five all-time favorite songs, I handed my camera to Breto and climbed over the two rows in front of us to join Josh and the gathering crowd at the stage, and for the next five minutes we partied like it was 1999. 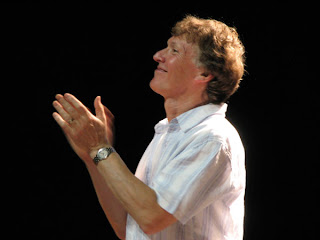 Finally, the Hammond went silent, the band rose and gathered at mid-stage, and bows were taken. Steve and the boys exited stage right and left us with the crowd still roaring our thanks for a lifetime of good music. 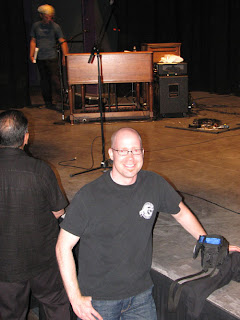 After most of the crowd left, Breto and Josh and I still stood at the edge of the stage, almost contemplating whether if we hopped up there ourselves if we could channel some of that same energy. Eventually we left, taking in the warm Summer air along 400 West while “Higher Love” still rang in our ears. Breto married a girl that digs 80’s music, and I don’t know what Josh’s wife likes. Still, Fiona and Melodi have been great for my friends, and I’m sure that my wife will be great for me someday, too, whether she listens to Donovan or not.

Just as long as she doesn’t like Garth Brooks.
Posted by The Professor at 3:57 PM