Looks like it's either feast or famine on this thing...

Last night I spent some more time out at the KJZZ studios in West Valley, taping an intro for another clip I did that will be featured on this Saturday's broadcast of "B All Over" (airing at 10PM on KJZZ, Channel 14...well, actually around 10:45, since my clip will be the last to air). This clip will be a follow-up to the Rocky Anderson interview that ran two weeks ago, based on his recent hallway fracas with Dell Ray Hansen. If you miss the broadcast, don't get Utah cable stations, or just happen to be one of those occasional people that land on my blog while surfing randomly in India, I'll post a compressed version on my own site once the show airs.

But that's not all!

In the last week I've also taken a trip to Jackson, Wyoming and gone to a Steve Winwood concert in Salt Lake, both of which should be covered in upcoming columns. New material! What a concept! My trip to Jackson also gave me additional material towards a piece I've been mulling for some time, a bold attempt to capture my utter loathing of country music in words. 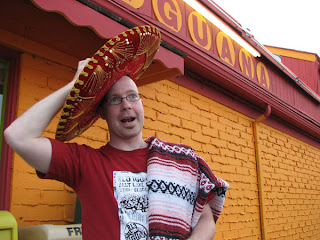