Before turning 25 earlier this month, my sister had been feverishly working on a list of goals to accomplish before hitting the quarter-century mark. Appropriately (and symmetrically) titled “25 things to do before I turn 25”, the list included tasks as varied as flying a kite, learning a song on the piano, and skydiving.

One of these tasks was to visit nearby Antelope Island, so on a recent Thursday night, with nothing else of significance going on (meaning I had things to do, but chose emphatically not to do them), I joined her, her roommate Teresa, and her longtime friend and fellow Lord of the Rings/Harry Potter/Star Wars enthusiast friend Jessica for a quick drive out west.

Seemed like the perfect opportunity for a photo essay. Lucky you!

It was quite exciting to be able to go out to the land that inspired the short film classic, "Attack of the Killer Brine Shrimp", available at disreputable local video outlets everywhere. I found the brine shrimp so inspiring I used them as one of the main characters in a 168-page screenplay that also dealt with the lighter side of Kung Fu. Smashing stuff!

I never knew this, but you access the road to Antelope Island off the same freeway exit you take just past Layton Hills Mall to get to Famous Dave’s. Turn right, and you get BBQ and blues music; turn left, and drive for a really, really long time, and you find yourself on an island hanging out with a bunch of seagulls.

On this day we opted for the seagulls, and after paying the tollbooth lady $9 (you have to pay money to drive on the road—the “causeway”—out to Antelope Island. I’m not sure why this is, but it reminds me how grateful I am that we have not followed the example of our fellow states back east who have chosen to stick annoying toll roads all over the place.), we found ourselves on a straight-shot two lane road headed due west, pretty much out over the Great Salt Lake.

The thrill was so overwhelming I demanded that Katie stop her ’93 Geo Prism immediately so I could document the moment. Here, then, is a photo of a $9 road: 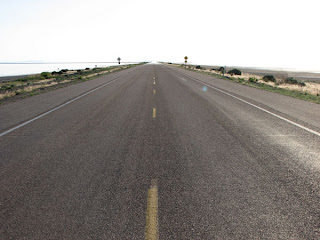 Upon closer examination, we were concerned to discover that our precious road appeared to be heading off into oblivion; there was no tangible end in sight. Perhaps it was a cruel joke by the tollbooth lady, we mused; she just sits there all day pocketing cash and watching unsuspecting drivers roll off to merge with the infinite.

Cautiously, we pressed on, but not before taking some more photographs of the wonders of Mother Nature. Seems the old gal can do some fascinating things when she gets a hold of a little salt. Observe: 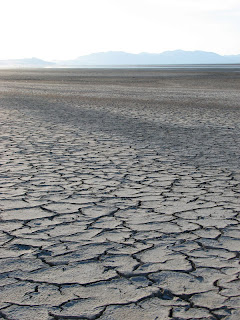 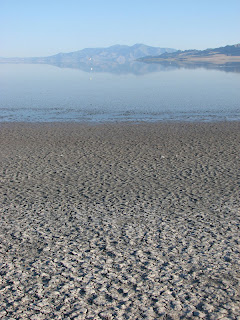 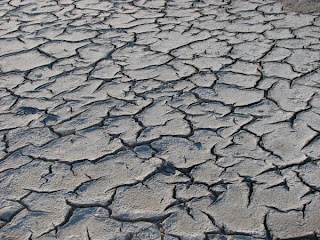 When we finally arrived on the island after an arduous five-minute drive, we staggered out of the car and got reaccustomed to standing on solid ground again. I immediately stole off towards the lakeshore, abandoning my three female companions and reminding everyone why after nearly fifteen years of dating experience, I remain single and largely clueless. But I did get some nice photographs. Behold: 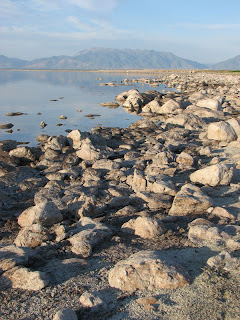 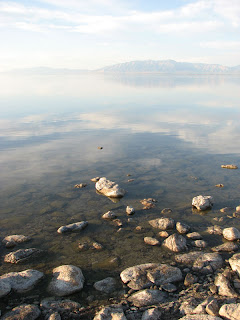 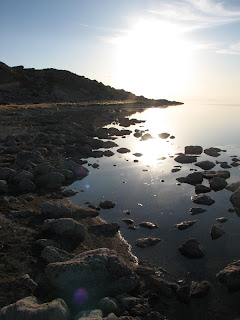 In the process we came across a number of examples of indigenous wildlife, and even one brave representative of the so-named antelope community. Though if we’re going by sheer numbers, the island should be re-named “Microscopic Swarming Lake Stink Insect Island” by the end of this year. Or maybe at least “Garbage-Sifting Seagull Island”. The only life form more plentiful than the seagulls were these teeny bugs that would swarm hundreds and thousands at a time whenever you stepped on the rocks near the lakeshore. It occurred to me that under the right circumstances, the bugs could be used quite effectively as the catalyst for a really bad horror movie. 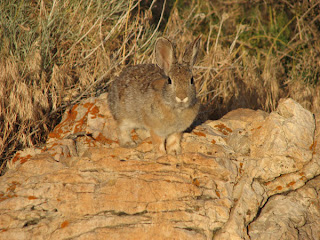 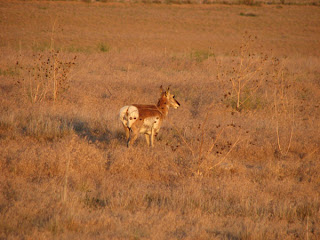 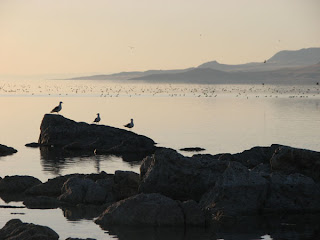 After my contemplative sojourn, I made my way back to Katie’s car, which was now abandoned, but at least left the doors open. In the process of my hike I realized that when Katie and her friends offered to have me join them for a bite at Subway an hour earlier, I should have accepted, seeing as how the grand total of my food intake for the day up to that moment had been three tortilla chips which may or may not have included salsa.

Trudging along the shore, I began to rapidly lose energy and stamina, and so upon returning to the car I scoured the vehicle for food, finding only a bottle of very warm bottled water.

Soon after, as I lay sweating in the passenger seat, Katie and her friends returned, and I learned that while I was away she had accomplished yet another of her list tasks, which was to fly a kite. Once again Katie had demonstrated the proud family tradition of killing multiple birds with the same stone, which is a much better tradition than the one we have of going back into the house three times after starting the car in the driveway because we keep forgetting something we are going to need while we are out.

So on a wave of new enthusiasm, we all got back in the car and made our way further into the depths of the island, finally locating a picturesque spot on a western beach that looked perfect for some sunset images. Before long, the sun delivered, and we picked up the following: 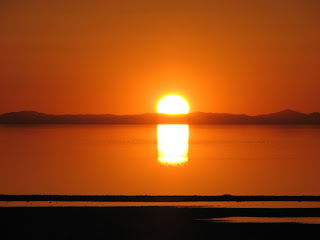 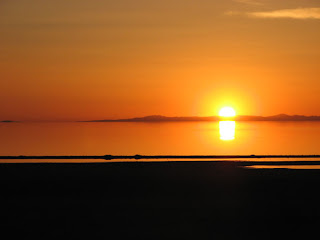 Many of the sunset photos included four figures that were out on the beach near the lakeshore while we were shooting. I tried to get their dark silhouettes in the frame because I thought it would make for a serene artistic vision to include real human beings. But when I looked at the photos on my computer once I got home, I realized that the group was comprised of an engaged couple, a photographer, and a lackey out taking shots for a wedding announcement. Plus the groom had popped his collar.

On the way home, while answering the various voice mail messages that had failed to reach me while trying to achieve oneness with nature, we were flying east on the causeway when suddenly the car was overwhelmed with a stench so pervasive and overpowering I was dumbfounded that there wasn't a gymnasium or an oil refinery for miles. I mean, this smell was BAD. I was trying to tell my father something on the phone, but had to stop several times out of sheer horror at the stench. All I can say is that what we think is "lake stink" is nothing. And keep in mind, this is coming from a guy who regularly insists that he has an underdeveloped sense of smell. Whatever we encountered out there was plain demonic, and it's a good thing I wasn't driving at the time, otherwise Mr. Prism would have met Mr. Salt Lake and given birth to Baby Rust.

Now that would be fodder for a horror movie... 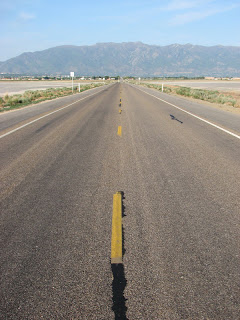 And so, thanks to my forward thinking, goal oriented sister, I had managed to bandwagon my way to a quaint photo essay. Something to stick on my blog and pretend to substitute for the real comedy writing I was supposed to be using it for.

Once again I am indebted to my kid sister. Welcome to your quarter-life crisis, punk. 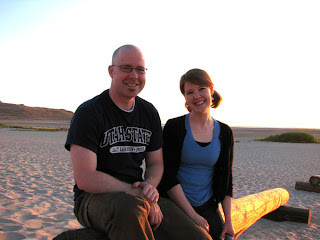 Posted by The Professor at 3:04 PM