With the sideline on his right, and the rest of my team closing in on his left, the running back had no option but to come straight at me, which was just what I wanted. If we'd been playing tackle football, my job would have been easy: square up, pick a point on the other side of my target, and plow through the running back on the way to that point, wrapping him up and dropping him on his back. Simple.

But we weren't playing tackle football. The running back sweeping around towards me under the glow of the playground floodlights was wearing flags at his hips, which meant that unless I wanted to start a fight, a straightforward tackle was not an option. But I knew from long experience that snatching at those flags carried a problematic success rate. So I compromised: I squared up, let him come at me, and prepared to wrap him up, getting him in my grasp as if I was going to tackle him, then pull his flags instead.

And that's pretty much what happened. Pretty much. The problem is that a split second after I'd pulled my opponent's flags, one of my teammates collided with us from my right side. His momentum, combined with the remaining momentum of my opponent, flipping the running back head over heels, and specifically, heel into my chin. As my opponent's cleat smacked my jaw, I felt a surge of adrenaline at the ringing pain that jolted through my body. It energized me, and I hopped back to my feet, annoyed that my teammate couldn't control himself, and stalked back toward the line of scrimmage, eager for the next play. But as I did, I noticed people giving me strange looks. Something was wrong.

"Dude, you're bleeding," someone said.

I reached up to my chin and came back with fingers coated in blood. A mirror inside the nearby church bathroom revealed a three-inch gash that started on my chin and made its way up the right side of my jaw. I was mad. I wanted to play my game. MY game. But now my night was over. My night...my game...had been taken from me. 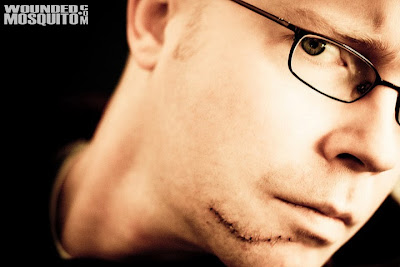 I love playing football. Ever since the 6th grade, football has far and away been my sport of choice. I have logged hundreds if not thousands of hours playing pickup basketball over the years, but basketball is a consolation prize, burdened with an irreconcilable height disadvantage. Football is the game that makes me feel like I'm playing on my home turf. A game where a well-timed forearm shiver has a way of leveling the playing field.

Football was the first game I felt good at. By the time I started throwing around an imitation youth-sized pigskin, I was in my sixth year of rec league soccer. But soccer never caught my imagination, and I couldn't dribble for beans, anyway. Basketball was a passion, but one that always left me feeling a step behind. Football, though...I may not have been the biggest guy (or even a big guy at all), but I was quick, and I had good hands. I loved the explosive nature of the game--ten seconds of high energy at a time, a blast of speed across the middle, and I was either catching a spiral or hammering the guy who did. In football, passion was an equalizer.

I can't remember any specific moment that sparked my love of the game. There was no pass caught or hit delivered that flipped a switch inside. I just remember countless pickup games on the playground or in the neighborhood, and when there weren't enough guys to play, my buddy Greg and I would run pass patterns up and down an empty field, putting the finishing touches on our 187th consecutive Super Bowl Championship. Greg was a diehard Miami Dolphins fan, and tried to channel Dan Marino with every tight spiral. But I identified with the outlaw Raiders, and would spend my off hours listening to the immortal John Facenda narrate highlight films of their great 1970s teams since, ironically, I got into football just about the time the Raiders went in the tank.

This lasted through junior high and high school, where I played my one and only season in pads, for Viewmont High School's sophomore team. That single "legit" effort produced a lot of memories, but it pretty much killed my NFL aspirations. It was clear that my home would be the playground. My love of the game persisted while I was in the mission field, logging games in Joliet and at Gage Park in south Chicago, and once I got back, the centerpiece of my season became the annual Turkey Bowl, an all-out tackle football slug fest without pads. We left those games with plenty of scrapes and bruises, but even more glory.

Those Turkey Bowls were local classics, ground out in the fields behind Centerville Junior High School in a range of conditions. One Thanksgiving we were playing in the rain under a gathering thunderstorm. I'll never forget the image of my friend Jason Johnson taking a deep kickoff and starting up the field toward me as lightning crashed in the distance behind him. Another game was preserved on video, a brutal defensive standoff that saw a single touchdown scored in over 90 minutes of playing time, unheard of in games that usually deliver scores in Arena ball ranges.

As my twenties rolled on, the games started to dwindle. Tackle football became flag football, and a half-dozen pickup games a year became one at best. Some of my peers started playing soccer instead of football on Thanksgiving, and to my shame, I spent more than one holiday morning kicking a soccer ball instead of catching a deep post route. After I passed 30, I began to suspect that I had come under some kind of anti-football curse. Starting with that cleat-to-chin collision back in 2009 that left me with eleven stitches and a Harrison Ford-like scar for posterity, my gridiron encounters became both few and violent. A year later, I got back together with the same group of guys, and promptly dislocated the last knuckle of my middle finger catching a touchdown pass. The year after that my roommate invited me to play indoor soccer on Thanksgiving, and since I didn't know anyone hosting a football game, I joined him. Then last year I played my first Turkey Bowl with my new home ward, and pulled a hamstring returning a kickoff ten minutes into the game. I was so miffed that I refused to leave the game for another half-hour, limping around the field and catching three touchdown passes on five-yard outs because I couldn't run any farther in a single stretch. And I worried that my favorite game was being taken from me forever.

So when this season's 30th Ward Turkey Bowl rolled around, I felt a combination of excitement and apprehension.  Surviving a game without incident would prove that it was OK for me to still play football, that the window on my favorite game still hadn't closed. I drove up to the field last Thursday morning with a simple plan: suit up and play for an hour or so, then grab my camera out of my trunk and get some action shots for the portfolio.

The 30th Ward plays on this miserable hole-dotted, square-shaped field just west of the church that is about two-thirds grass and one third dirt, and feels like cement when you run across it in cleats at 8:30am (and you have to get there early, lest some other group claims your spot). We were playing flag, but flags wouldn't stop a bad fall from messing you up. By the time we started, it was still cold, but we also had about 25 guys, which is kind of a mess on a field that might be 60 yards long at best. Getting any quality action out of this game would be a challenge.

A half-hour in, I still hadn't been targeted for any passes, even though coverage was loose on my end of the field. A friend gave our quarterback a heads-up on the situation, and as I took off on a deep post on the left side of the field, he unloaded a bomb in my direction. I felt the rock-hard dirt underneath my cleats, but I had my man beat, and I tried to focus on the spiral as it descended towards me. Four feet from contact, I stepped in one of a dozen holes in the field, and almost tripped, but somehow I reached out and made the catch, staggering past the cones as my man desperately tried to pull my flags.

About ten minutes later, we were getting ready to set up after another score when someone called halftime. I paused for a second, and decided that was my cue. With 45-minutes of injury-free football and a long touchdown to my credit, I figured it was time to pull out my camera. I walked to my car, pulled my rig out of the trunk, and started shooting, satisfied that I was doing it because I chose to, not because a hamstring pull left me no better options.

I had survived Turkey Bowl 2013. I was free of my curse. My game was still my game.
Posted by The Professor at 4:37 PM