I've held plenty of callings over the years. I've cracked the Home Teaching whip as Elders Quorum President, and taken notes at disciplinary counsels as a Ward Clerk. Welcomed new ward members as the Fellowshipping Co-Chair, and expounded on the Word of Wisdom as a Sunday School Teacher. My first calling was to lead the 11-year-old Blazer Scouts, and my toughest calling was a close cousin: Duty to God advisor for the Deacons Quorum.

For the four months I served as Duty to God advisor last year, my primary function was to teach a lesson to the Deacons one Sunday a month. No problem, right? It's not like I'd never been a teacher. I've got more than ten years experience teaching English composition to college students. I used to teach Sunday School lessons to rooms of 200+ young single adults in my U32 days. So what's the big deal?

The big deal was that I remembered being a Deacon. From the age of 12 to 14, 98.7% of my time in Sunday School or Priesthood was spent staring at my feet, ignoring the routine questions I'd been asked for almost a decade, refusing to give the obligatory answers (pray and read your scriptures!) or offer insight lest I come across as even more of a nerd than I already felt.

The only exceptions were the teachers who were funny, like Pat Reese, who could use his comic timing to make something as mundane as collecting Fast Offerings fodder for standup comedy, or the teachers who drew on relatable experiences, like the time the Bishop's son-in-law used his experience trying out for his high school basketball team to illustrate the pain of disappointment.

I knew my challenge going in, and a vague idea of how to address it. I needed to relate to my audience. But that was just the problem. I remembered how miserable it was to be a Deacon. My junior high years were filled with the greatest writing material a writer could ask for: church basketball, Boy Scouts, my first paid job on a neighbor's vegetable farm, and the high comedy that filled the halls of Centerville Junior High for three years. But that material could only be appreciated by my adult self. Living it was horrible, horrible reality. An inescapable vortex of infantile behavior, awkwardness, and hopeless despair.

Standing in front of the Deacons last year, a big part of me wanted to be direct and honest:

"Look...I've been where you are. It sucks. I know it sucks. Truth is, junior high is an awkward, savage transition we all have to endure, and the best thing I can tell you is you're not alone. It will all be hilarious to you someday in the future, but that day is so far off that it won't help you at all right now. If you can stick it out to 16, things will get a lot better, though then you'll start dating, and the less said about that, the better. Driving is pretty cool, though, if you can get a car. But until then, well, good luck. Just know that I'm here for you."

But I couldn't say that. Church isn't supposed to be a place for blunt negativism. I knew that from sad experience.

Shortly after my leaving my YSA ward five years ago, I dropped by a mid-singles ward in Salt Lake. It so happened that my drop-in occurred on a Fast Sunday, which meant I would get a chance to see the best and worst of the ward right away. As per tradition, a member of the bishopric was the lead-off hitter, transitioning the formal part of meeting into the open-mic portion of the agenda with a brief testimony.

Twenty minutes after starting his "brief" testimony, the Bishop finally turned over the mic to the congregation, and I felt like I knew all I needed to know about that ward.

"We know you're not where you expected to be in life..."

"We know that you are struggling..."

"We just want you to know that we are here for you..."

I looked around at the other 400 mid-singles sitting quietly throughout the chapel and overflow, and got the distinct impression that we had come together to wait for a storm to pass. All the testimonies that followed confirmed it. I asked myself: why would I want to attend a ward that just reminded me of what I wasn't happy about in life? Wasn't church supposed to elevate my spirits?

I decided to stick with the traditional ward...which led me to the Deacons.

Looking back at it, I now understand what my message to the 12-year-olds should have been: Reinforce the good. Make the best of where you are at, and be excited for the future. Damn the torpedoes of miserable reality, and choose to be happy. But before I could figure that out, I was released after four months and called into the Elders Quorum Presidency. The few lessons I taught the Deacons managed to connect here or there, but I was met with plenty of the same blank stares and empty silence I offered when I was sitting in their ill-fitting shoes. At least I never gave them the blunt diatribe I had in mind. It was a relief to get back to familiar ground, but even now, my experience with the Deacons feels incomplete. Maybe it's because I needed the lesson more than they did.

Or maybe I'll just teach it the next time I face a class of preteen mini-mes. 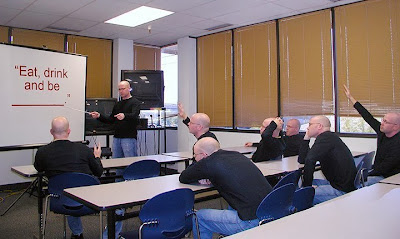 Posted by The Professor at 2:16 PM