I never reviewed the film "Liberal Arts" for the Deseret News, and it's probably a good thing I didn't, since I don't see how I could put together an unbiased review for a film that hit so close to home. I can't think of a movie protagonist who has mirrored my own place in life as much as Josh Radnor's Jesse. 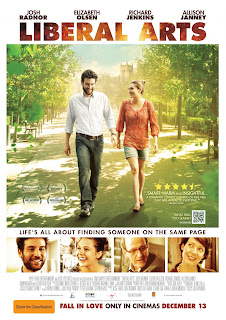 Jesse works in the admissions office of a prominent New York City college, and seems to be making the best of his mid-30s, even if he gets his laundry stolen once in a while. One day this existence is interrupted when he is called back to his Ohio alma mater to toast the retirement of his mentor after 37 years in the English department. Jesse's return to campus thrills him, injecting him with a passion and enthusiasm that seems to spring from ancient brick buildings and wide expanses of green grass and trees.

This enthusiasm is bolstered when Jesse is introduced to Libby (Elizabeth Olson), a 19-year-old freshman who is somehow connected to his mentor (a colleague's daughter, if I remember right). Like Jesse before her, Libby is an English major, passionate about books and words and poetry, and her wide-eyed innocence is endearing to her new nostalgia-drunk friend.

After the quick weekend visit, Jesse and Libby become pen pals (using real hand-written letters and everything), and they quickly develop a connection. Libby is wise beyond her years, and the driving force behind their relationship. Jesse is hesitant, but his heart gets the best of him. Besides, some quick math reveals that their age difference won't be that big a deal when he's in his '80s.

Their connection is genuine. Their friendship is genuine. But regardless of how things will look in 50 years, the present is a stumbling block. Even if the cosmos seems to be pushing them together (in the form of a mystical campus hippie played by Zac Efron, no less), somehow the pieces aren't connecting. It may have something to do with Libby's roommate and her annoying habit of showing up whenever Jesse visits the dorm.

While Jesse can't seem to decide whether the hippie is real, there is no doubt about his mentor, who is struggling to let go as much as Jesse is. He is another example of life's big secret: no one really feels like an adult. We all feel 19. Only mirrors tell us otherwise.

"Liberal Arts" isn't about English majors, and it isn't about age-appropriate relationships. It's about coming to those places in life where you don't feel the way you expected to feel, and the efforts we all make to return to or hold on to the things we wish we appreciated more the first time. Mostly it's about letting go and embracing the idea of getting older.

It was remarkable to watch Jesse wrestle with the same kinds of awkward questions and even more awkward social situations as I have in the last several years. I'd like to think it's easier to feel like an honest-to-goodness adult when you settle down with a mortgage and a wife and a family, but I'm sure my married friends have the same feelings. I know because they've told me as much. All I can say is that as a single Mormon guy in his '30s, adulthood has become a very abstract concept. And in that sense, "Liberal Arts" is batting a 10 for 10 on relatability.

It's very possible that "Liberal Arts" is not a great movie, and it's even more possible that most of the people I know won't relate to it or enjoy it at all. But I enjoyed it immensely. If nothing else, you have to love a film that above all, asks one penetrating question: "Does Zac Efron really exist?"
Posted by The Professor at 5:31 PM